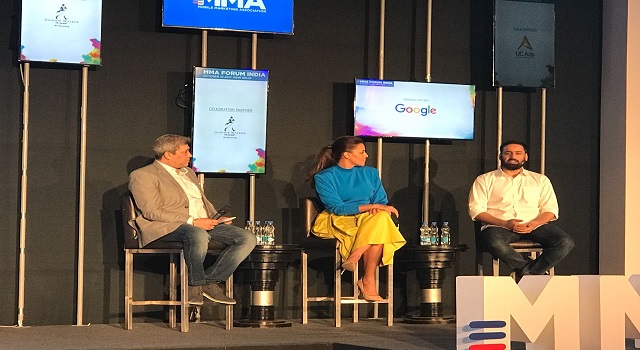 The power of native audio advertising took center stage on Friday at the 2017 Mobile Marketing Association (MMA) India Forum and MMA SMARTIES India Awards & Gala. Representatives from Saavn, South Asia’s leading streaming service for music and audio entertainment, led a panel on why mobile audio and podcasting is attracting more ad dollars than ever before.  Saavn also accepted two coveted SMARTIES at the Awards Gala for its #NoFilterNeha and brand integration with Liva, the fabric brand owned by the Aditya Birla Group.

For the panel, titled “The Next Frontier: How Advertisers are Tapping Into the Potential of Mobile Audio,” Ravi Shharma, Senior Vice President and Head of Sales at Saavn, spoke with Bira 91’s Head of Partnerships, Rohit Pillai, and Bollywood celebrity Neha Dhupia, the host of one of Saavn’s most popular original audio shows, #NoFilterNeha.

The discussion centered around the differentiation of audio in a cluttered visual advertising market. India has long used visual media when it comes to changing consumer behavior patterns. But while visual forms can have a strong impact, music is able to reach consumers on a deeply primal level.  Native audio advertising has been able to positively change audience mindsets which other brand communication channels have not been able to provide.

According to a recent Google Consumer Report for India, 76% of all mobile engagement for ages 25-44 is dedicated to music. Additionally, in a country where nearly 70% of the population is less than 30 years of age, many marketers view music as the means to engage youth.

Pillai, who has spearheaded campaigns for Bira 91 with Saavn, talked about the importance of reaching youth markets and millennials — who are keenly aware — with quality content and intention. “For us, it was crucial to identify a partner willing to discover and develop fresh content. We aim to work with [Saavn] to curate and create content that does not disrupt the consumer experience, rather enhances it,” Rohit Pillai said on the panel last Friday.

Dhupia provided the perspective of a creative producer and personality. Her audio show, in which she engages celebrities in raw, unfiltered and wildly-entertaining conversation, has just ended its second season. “From radio to audio books to podcasts, it seems people have always had a bit of a fascination with audio storytelling. Me and my company Big Girl Productions collaborated with Saavn on the original audio program #NoFilterNeha and I recognized this as a project I wanted to produce. Especially in the context of the show, my guests enjoy having the opportunity to put their own voices and words in the spotlight, rather than focusing on what they look like. The podcast format is freeing for them. As a result, they feel much more comfortable being open and transparent, and that’s the magic ingredient of the show,” Dhupia said in a separate statement.

“Saavn is leading an industry–wide focus into the true power of headphones as a destination for brands.  As India becomes a more mobile dense market every day, we’re seeing a tangible increase in the percentage of digital ad spends reserved for mobile audio and marketers’ desire to curate bespoke experiences for our listeners. For several years, we’ve primed our platform, data capabilities and user engagement strategies in order to support the demand with real results,” said Ravi Shharma, Senior Vice President and Head of Sales at Saavn. 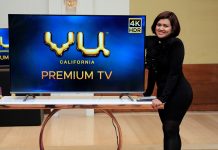 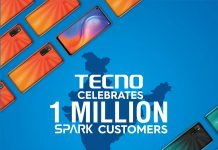 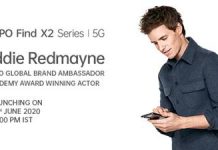 OPPO inspires people to push their limits with Finder Campaign