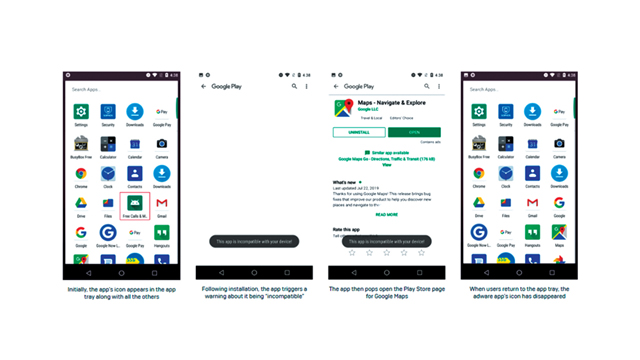 App developers have, for years, embedded ad-code into their apps as a way to help defray the costs of development, but some developers simply use their apps as a borderline-abusive platform solely to launch ads on mobile devices.

SophosLabs recently discovered 15 apps on Google’s Play Market that engage in such practices; They generate frequent, large, intrusive ads and literally hide their app icons in the launcher in order to make it difficult for you to find and remove them. Several of them go a step further by disguising themselves in the phone’s App settings page.

When first launched, the app displays a message that says “This app is incompatible with your device!” You might think that the app has crashed, because, after this “crash,” the app opens the Play Store and navigates to the page for Google Maps, to mislead you into thinking that the ubiquitous Maps app is the cause of the problem. It is not. This is a ruse.

The app then hides its own icon so it doesn’t show up in the launcher’s app tray. Others in the list hide their icon, too: Some do this on the first launch, while others simply wait for a while after you install the app. 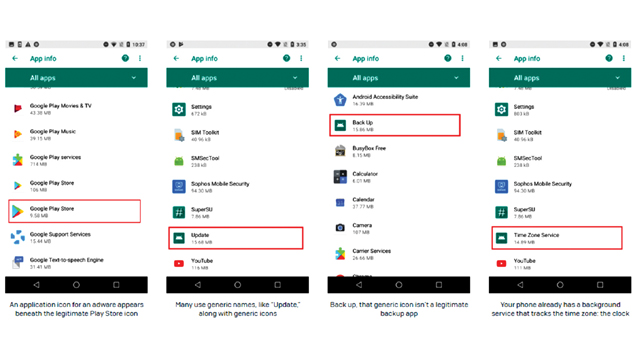 Nine out of the batch of 15 apps used deceptive application icons and names, most of which appeared to have been chosen because they might plausibly resemble an innocuous system app. (The app icon is still visible in the phone’s “gear” Settings menu, under Apps.)

By hiding their launcher icon, and using an application icon and name that resembles a system app, these apps make a convincing case to a casual observer that there’s nothing unusual installed on the phone.

Most of these apps were presented to the user as one kind of utility app or another. QR code readers, image editors, backup utilities, a phone finder, and most ironically. A utility ostensibly to . The apps further disguised themselves using a name representing a harmless app, such as Google Play Store, Update, Back Up, or Time Zone Service. These names appear only in the phone’s settings.

All of these apps appeared during this calendar year. The oldest one among these, free.calls.messages, was published in January; Two months after it appeared, it had more than a million installs. Although these apps were uploaded to the market by different publisher accounts, many shared similar code structure, UI, package names, and behavior — too many for it to be considered a coincidence.

Users not fond of adware

Most of these apps had negative reviews from users, many of which had complained about these apps not being able to run, app icon disappearing from the launcher, and of course the aggressive ads.

Android adware took a dark turn with the use of these persistence tricks. By leveraging increasingly innovative techniques to stay resident on the phone, apps like these can quickly infect mass numbers of victims within a few weeks of their release. Users should pay close attention to user reviews before installing apps from Google Play (and don’t be the first person to try out a brand new app).

SophosLabs notified Google about these apps in July and, as far as we know, they have been taken down. These apps are detected by Sophos Mobile Security as Andr/Hiddad-AB and Andr/Hiddad-AC.

Andrew Brandt, Principal Researcher, SophosLabs said, “While these apps have been removed from the Google Play Store, there may be others we haven’t yet discovered that do the same thing. If you suspect that an app you recently installed is hiding its icon in the app tray, tap Settings (the gear menu) and then Apps & Notifications. The most recently opened apps appear in a list at the top of this page. If any of those apps use the generic Android icon (which looks like a little greenish-blue Android silhouette) and have generic-sounding names (‘Back Up,’ ‘Update,’ ‘Time Zone Service’) tap the generic icon and then tap ‘Force Stop’ followed by ‘Uninstall.’ A real system app will have a button named ‘Disable’ instead of ‘Uninstall’ and you don’t need to bother disabling it.”