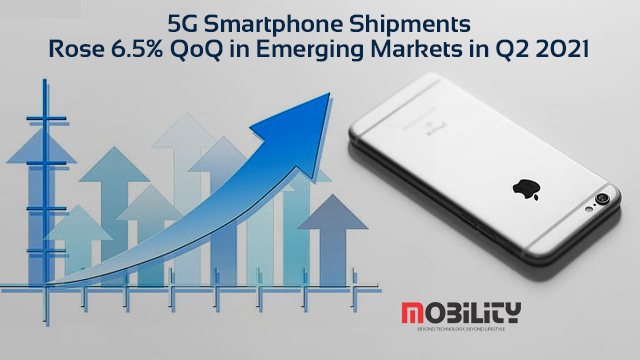 According to the latest data from Counterpoint Market Monitor Service, 5G smartphone shipments rose 6.5% QoQ in emerging markets in Q2 2021, though the total shipments in these regions dropped 5% in the same period,

This growth in 5G shipments can be attributed to the excitement created by the iPhone 12, Apple’s first 5G-capable device, and the launch of 5G models in the affordable segments by other OEMs, like OPPO, Vivo, Xiaomi, and realme. Also, emerging markets, especially Southeast Asia and the Middle East, are catching up in 5G infrastructure, leading to increasing demand for affordable 5G phones.

realme, the world’s fastest-growing smartphone brand, has become a Top 6 smartphone vendor in the global rankings, according to the latest market insights conducted by Counterpoint Research. realme took the sixth spot with 15 million shipments and 135.1 percent YoY growth in Q2 2021. As a notable industry disruptor, the upstart brand has made the mark in a time span of just three years.

Mr. Sky Li,  Founder, and Chief Executive Officer, realme said realme’s next goal is to achieve a dual-100 million target – shipping another 100 million handsets by the end of 2022 and completing the same milestone within 2023 calendar year.

As for its product strategy, realme will streamline its multiple product lines and optimize its technological offerings. The GT series will become its only premium product line to explore cutting-edge technology and disrupt the high-end segment.

Mr. Madhav Sheth, Vice President, realme and Chief Executive Officer, realme India and Europe, “realme was founded with a belief to provide young people with products with leap-forward performance and trendsetting design at a democratized price, and this is how realme was able to achieve all these milestones so fast. Supported by a young but strong team, we maintain rapid growth in core markets and expand fast in newly entered markets with a global mindset. realme entered one new category per month on average since 2020 and gradually built a realme TechLife ecosystem. From a popular smartphone brand, we are now on the way to a great Tech brand.”

Mr. Sky Li,  Founder and Chief Executive Officer, realme, “The brand’s next goal is to achieve a dual-100 million target – shipping another 100 million handsets by the end of 2022 and completing the same milestone within the 2023 calendar year. As for its product strategy, realme will streamline its multiple product lines and optimize its technological offerings.”

Major smartphone OEMs are now prioritizing 5G products in their portfolios, which is especially true in emerging markets. realme is aggressive in popularizing 5G devices. The OEM’s 5G share in its emerging market smartphone shipments went up from 8.8% in Q1 to 15.9% in Q2, ranking 3rd following Apple and Oneplus. The OEM’s global shipments increased 135% YoY to 15 million in Q2 2021, coming to the sixth for the first time. Globally, realme’s 5G devices took up 37.0% in shipments in Q2, increasing from 22.7% in Q1.

In the developed markets, customers now take it for granted that new smartphones support 5G. However, this perception is yet to gain ground among a majority of emerging market consumers. And the emerging markets are the ones that have the maximum potential for future growth.

India’s market, which posted 75.5% QoQ growth in 5G device shipments, will likely sustain the current strong momentum through the rest of this year. Countries in Southeast Asia will also likely see a 5G shipment increase in H2 but the real difference will be made in 2022 when major countries in the region put 5G into commercial use.

Affordable 5G products may prove to be a game-changer, and OEMs with popular 5G budget phones should witness a considerable jump in their market shares. This is an opportunity no OEM would like to miss.