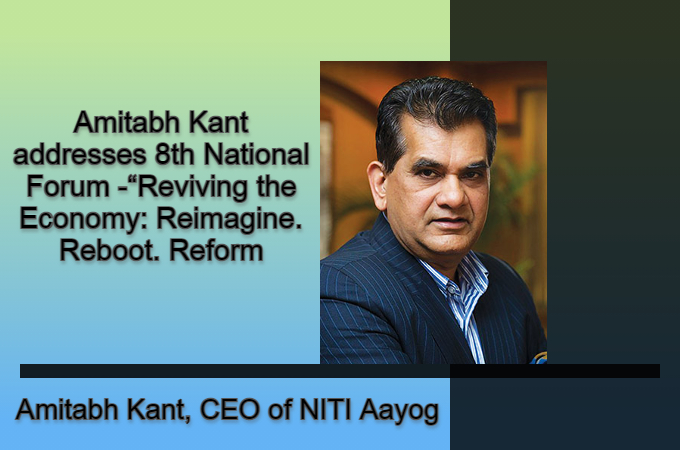 “Affordable internet connectivity and technology-based infrastructure are the only ways to enhance the education sector in the country. Relying only on physical infrastructure will not be sufficient, said Mr Amitabh Kant, CEO NITI Aayog.

Speaking at the Public Affairs Forum of India (PAFI)’s 8th National Forum with the theme “Reviving the Economy: Reimagine. Reboot. Reform” that was held virtually, Mr Kant added that integration of technology in the education system will address the problem of a digital divide in India and bring revolution in the rural areas.

Expressing his faith in technology to usher in transformative change at a huge scale, Mr Kant said “India’s performance on learning outcomes still needs a lot to be desired. That will not happen in the traditional method of teachers training. The only way we will improve our learning outcomes is to use technology to leapfrog in a very big way.”

Mr Kant said the new national education policy of India was very responsive to the “clarion call” to integrate technology at every level of instruction. He further added that, “In the Aspirational District Programme, which has the most backward, difficult districts of India, we have partnered with Byju’s to provide learning materials, coaching for competitive exams such as JEE and NEET free of cost. That is the transformative impact that we expect the technology to have. And a comprehensive EdTech architecture will lead to access to learnings especially to disadvantaged groups.”

Mr Kant expressed confidence that India was set to become the EdTech capital of the world, and for that he sought the participation of more technology players and drivers of growth for EdTech education. “This is a huge win-win for us if India becomes the EdTech of the world. We will ensure that not merely students benefit, but the country also.  Technology will enable us to spread better education to villagers of India and make a quantum jump in education.”

Mr Byju Raveendran, Co-Founder & CEO of Byju’s, said the EdTech offered an opportunity for students to learn and it can make India a global talent pool for teachers. He further said that, “We are on the path the way students are learning in India and globally. Access to good teachers in small towns is a challenge. There are areas where we can improve the way student learn, creating formats which are appealing for them to become self-learners or active learners.”

Mr Byju Raveendran mentioned that “We have started initiatives under ‘Byju’s education for all’ with an aim to make difference to 5 million students by 2025. We have doubled the target after receiving the response in first 12 months.”