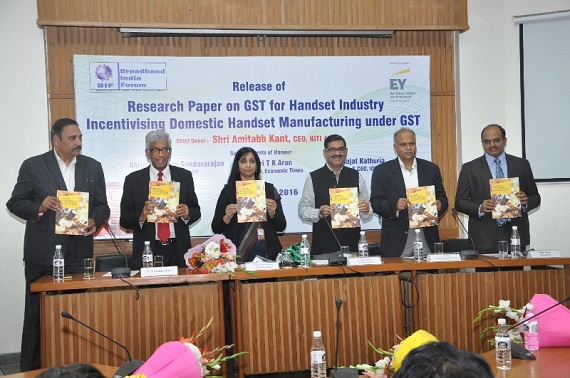 The country has embarked on one of the world’s most ambitious broadband project with the “Digital India” program, which seeks to transform India into a digitally empowered society and knowledge economy. Online media consumption has shown tremendous growth over the past few years. Among the digital devices, mobile devices have taken over as the preferred medium of consuming online media. Most of the users are now accessing internet via mobile devices and mobile devices are expected to reach masses.

Wider deployment of 4G networks along with affordability and indigenization of smartphones is going to drive mobile broadband to the next level of penetration via handsets. With the rapidly increasing demand, it is important to incentivize the local manufacturers to meet majority of the demand through domestic production.

Speaking at the event T.V. Ramachandran – President of BIF said “While Broadband infrastructure is at one end of the issue, Customer Premise equipment (CPE) is at the other. The Broadband device today is a Smartphone. We need to increase Smartphone penetration as India has today less than 30% Smartphone penetration. This can only happen through local manufacturing and by further increase of local value addition. Further, Broadband India Forum (BIF) along with E & Y is proposing an innovative way using GST to incentivize handset manufacture. This we believe is a win-win formula.”

Speaking at the event Bipin Sapra – Partner EY said, “Handset manufacturing industry has seen a tremendous growth in past few years driven by Government’s ‘Make in India’ initiative and policy changes such as duty reduction on domestically manufactured handsets. It is expected that the adoption of smartphone in India will go up to 688 million by 2020 as compared to 238 million in 2015. With the introduction of GST, most of the current Centre and state taxes/duties will be subsumed under GST. The Excise duty on manufacture which was a single point tax and the basis for all incentives would also be subsumed. Thus, it is expected that the incentives available to domestic manufacturers under the current regime would decrease and there is need to continue the incentives under the GST regime to meet the increasing demand through domestic production.”