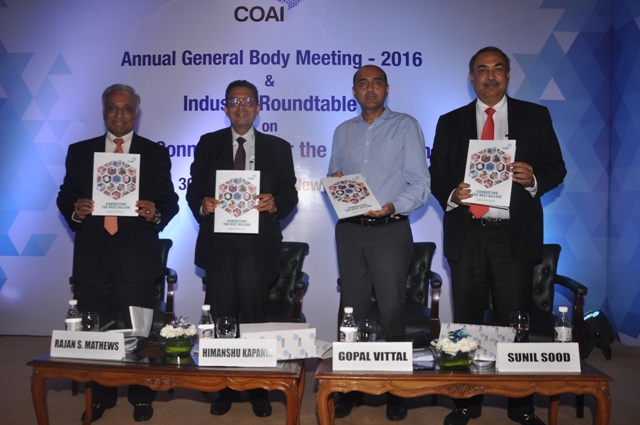 COAI, an apex body representing seven leading mobile service operators as its core  members and an associate membership base comprising leading telecom equipment manufacturers, communication services and product companies based in India, in its Annual  General  Body  meeting today, announced  the  election  of  its  new leadership  for  2016-17.

Mr. Gopal Vittal, who has over 25 years of experience in telecom and fast moving consumer goods (FMCG) industries, was elected Chairman on the occasion. In his role as MD & CEO of the country’s largest privately integrated telecom operator, he is responsible for defining and delivering the business strategy and providing overall leadership for Airtel’s India & South Asia operations. Mr. Vittal has previously held posts like Group Director, Special Projects (April 2012 – Feb 2013) and Director, Marketing at Bharti Airtel (2006-08). An alumnus of Madras Christian College and IIM Kolkata, he has also been with Hindustan Unilever, where he headed the US$3.5bn Home and Personal Care Division. Over a 20 year tenure at Unilever, Mr. Vittal worked on several national and global assignments across sales, marketing and general management.

Mr. Sunil Sood has been the Chief Executive Officer and Managing Director of Vodafone India Limited since April 2015. Mr. Sood served as the Chief Operating Officer at Vodafone India Limited since February 3, 2012 and served as its Director of West Zone. Mr. Sood is part of the senior leadership team at Vodafone India and is responsible for the day to day operations and the P&L management for all circles in the country. He also spearheads the new business development initiative of Mobile Commerce for the organization. He is a Telecom Veteran and has been in the industry for over 12 years. Prior to joining telecom, he has had a long career with Pepsi in various roles within India and abroad, where he also served as the Chief Executive Officer at Pepsi in Bangladesh. He has also spent four years in Nigeria where he was working to establish the market for Nestles milk and infant formulae in the country. He served as a Non-Executive Director of Safaricom Limited since October 31, 2012 until March 06, 2015. He has an MBA from Indian Institute of Management Calcutta and a BE from Indian Institute of Technology, Delhi.

Mr. Rajan Mathews, Director General, COAI,  extended his heartfelt gratitude to Mr. Himanshu Kapania,  the  outgoing  Chairman  of  COAI  for  his dynamic leadership to make the regulatory environment effective during one of the  most  challenging and demanding periods in the history of Indian telecom industry. He also welcomed the new leadership at the helm of the association and congratulated them for accepting their positions for the coming term. COAI looks to continuing its leadership role for the Telecom industry under the dynamic/ leadership of Mr. Vittal and Mr. Sood.