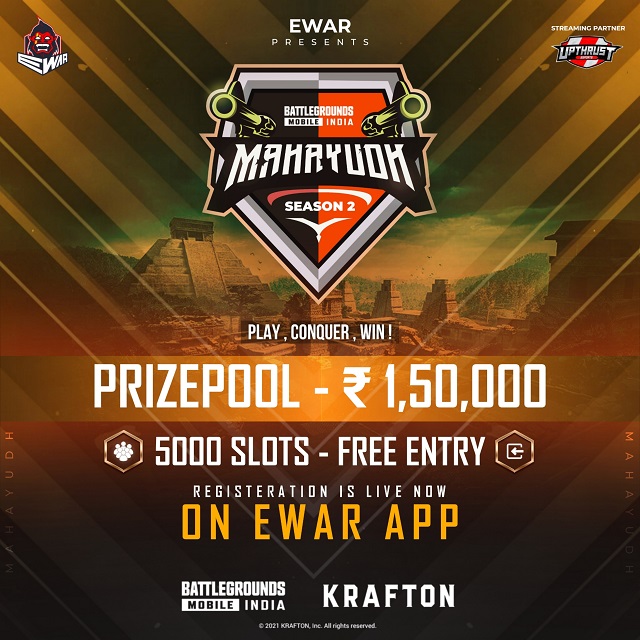 Bengaluru-based gaming and esports start-up EWar Games has announced the 2nd annual edition of its flagship ‘Battle Royale’ squad-based mega-sports tournament franchise titled EWar Presents Battlegrounds Mobile India Mahayudh Season 2. Notably, this BGMI Mahayudh tournament organized by EWaris one of the first and biggest tournaments of Krafton’sBGMI (Battlegrounds Mobile India) in India, since the game’s official launch in July this year; and will witness participation from several prominent professional BGMI squads, alongside 5000 ‘underdog’ teams will also be a part of this event.

Notably, the tournament – which has collaborated with UpthrustEsports as its official streaming partner and GemWire as the official media partner — is offering a massive prize pool of INR 1.5 lakhs; the prizes (monetary rewards) which will be given out to the winner (INR 75K), 1st runners up, 2nd runners up and 3rd runners up teams of the tournament. The top 3 ranked teams of the Mahayudh will also be invited to the next BGMI tournament conducted by EWar Games. Additionally, there will be a cash prize for one ‘Most Valuable Player’ — who will be chosen once the tournament gets over.

The 18 pro teams that have been invited and have confirmed to be a part of EWar’s BGMI Mahayudh Season 2 are – SouL, SKYLIGHTZ, F1-LS, IND, MARCOS GAMING, OR, TEAM 8BIT, GE, FIN-VR1, RVNG, ENIGMA GAMING, REDOWL, GALAXY RACERS, REVENANT, TEAM iYD, 7SEA and RICH NAMMA BENGALURU. On the other hand, 5000 ‘underdog’ amateur teams with over 20,000 players (4 players per team) will be competing fiercely in the ‘Qualifiers’ and ‘Quarter Finals’ stages of the tournament, following which only 10 teams will proceed to the ‘Semi Finals’ stage where they will be facing the elite ‘pro’ teams.

Speaking about the tournament, Mr Nauman Mulla, Head of Esports, EWar Games says, “After huge success in Season 1 last year, we are happy and glad tohost the 2nd season of our quintessential esports tournament – EWarMahayudh, which will act as a catalyst to accelerate the excitement and growth of and for the vibrant BGMI gaming community across India. Through this Mahayudh tournament, our objective is to provide a great platform for budding, less-known Battlegrounds Mobile India gamers in the country, and enable them to compete and prove their mettle against the top-notch BGMI squads as the nation. Currently, we at EWar are witnessing a lot of buzz and excitement in the esports community around this tournament. We look forward to an action packed, highly completive tournament over the next few days.”

The Semi-Finals of the BGMI Mahayudh Season 2, which is scheduled to happen between 24th to 26th August, will witness the battle of the ‘underdogs’ vs. ‘pros’, and will be restreamed on UpthurstEsports’ channel, in addition to livestreaming on EWar’s official channel. The Finals of the Mahayudh Season 2 will be held and streamed on 27th, 28th and 29th August, where 19 top teams (18 qualified teams from the Semi Finals stage + 1 Fan Favourite team) will be taking part.

At the moment, free-of-cost team registrations (with no entry fees) of the tournament are underway on EWar’s mobile gaming app. Only within a few days of opening up registrations, EWar has received registration applications for over 5000 teams from various parts of India. Registrations will close on 19 August 2021.