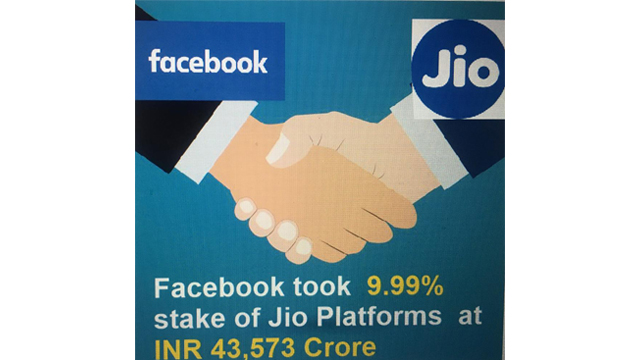 Facebook has announced it invested $5.7 billion for a 9.99% stake in India’s Reliance Jio Platforms, a three-and-a-half-year-old subsidiary of the nation’s most valued firm, Reliance Industries, and the biggest telecom operator in the country with more than 370 million subscribers. The deal, which valued Jio at a pre-money valuation of $65.95 billion, makes Facebook the largest minority shareholder in the Indian telecom network.

Reliance Jio, which began its commercial operations in 2016, upended the local telecom market by offering bulk of 4G data and voice calls for six months to users at no charge. The telco kickstarted a price war that forced local network providers Vodafone and Airtel to revise their data plans and mobile tariffs; however, they struggled to match the offerings of Jio, which has become the top telecom operator in the country. Reaching Jio’s users might interest Facebook, which attempted and failed to expand its free internet initiative, Free Basics, in India. The company has since expanded Express Wi-Fi to India — though its potential and scale remains comparatively small.