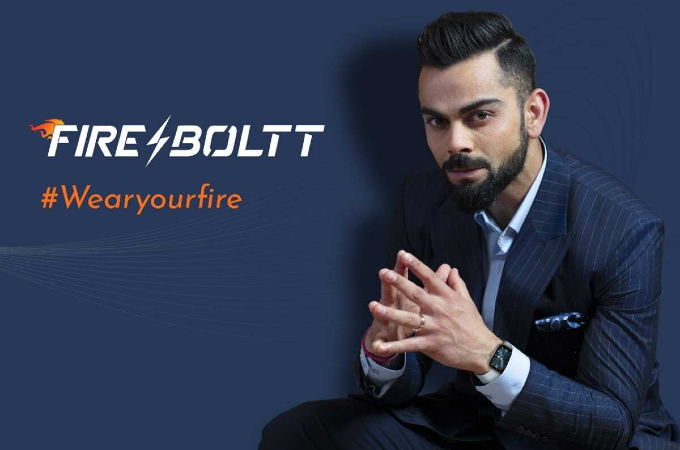 Fastest growing Indian wearable brand Fire-Boltt has named cricket captain and young India’s heartthrob Virat Kohli as its new brand ambassador. The skipper will participate in different marketing, ad, and endorsement campaigns of the homegrown brand, which as per IDC is driving the Indian wearable market with unprecedented growth numbers. Both Fire-Boltt and Virat Kohli embody an exuberant-yet-strategic approach to emerge as winners, and this is what makes the collaboration a natural unison.

“Virat Kohli is a role model for not just Indians but cricket lovers around the globe. His mention alone can inspire millions to chase their dreams and aspirations, and we decided to join hands with him in sync with our vision of an evolved lifestyle for all countrymen ushered in by lifestyle devices such as a smartwatch. Just like a cellphone in every hand is a reality today, we want a smartwatch on every wrist in wake of the new normal. People need to keep a tab on their health even while on the go and there can be no better enabler than smartwatches,” said Fire-Boltt Co-Founder Arnav Kishore.

The Indian cricket skipper too echoed the sentiments about the health concerns for people. Referring to the collaboration, he added, “Fire-Bolttas a brand personifies energy, dynamism, and vibrancy, all of which has actually been a driving force in my sporting as well as a life journey. The fact that the company is at the helm of history being scripted in the Indian wearable space makes me proud as an advocate of Vocal for Local and Atmanirbhar Bharat.”

Interestingly, Fire-Boltt had a few months earlier brought on board Bollywood star Vicky Kaushalas its first brand ambassador. The company also recently announced its plans to go global in a big way, however, details of the same are yet to be unveiled.