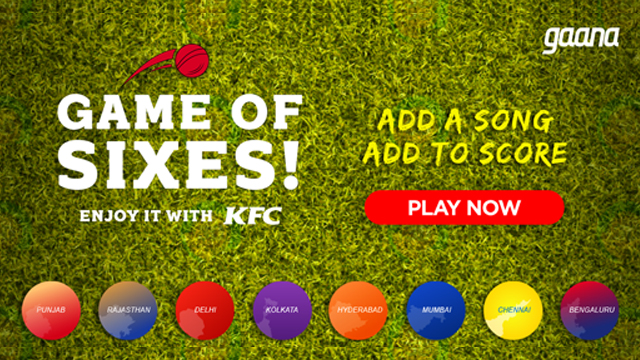 For a country that lives and breathes cricket, Gaana, India’s top music streaming service, has introduced an unforeseen innovation which integrates the emotions of the sport into a musical aura through an exclusive musical gaming property called “GAME OF SIXES”. By gamifying both listening to music and user generated playlist curation, Gaana has created a competitive experience for users.

Users can choose a city team, such as Bengaluru, Delhi, Kolkata, Punjab, Chennai, Mumbai, Hyderabad and Rajasthan. All users supporting a particular team will be registered to a cumulative playlist. In order to score runs for the team, users can either play songs from their team playlist which will grant them 1 run per play or add a song to the team playlist wherein each added song grants them 6 runs. The team with the greatest cumulative runs at the end of the 15-day campaign will be declared winners. The GAME OF SIXES has no restriction in terms of total number of players playing simultaneously for a team.

Gaana’s objective is to engage users with the GAME OF SIXES during the cricketing season and generate brand awareness among the millennials (12-34 years old) who have high affinity towards both cricket and music. The campaign primarily looks to engage the target groups with an electric gaming experience and offerings from KFC to provide them a complete festive sports-based environment.

The GAME of SIXES campaign also provides different channels for digital marketing and promotions through the Gaana App and the massive audience base on Gaana’s social media platforms like Facebook and Twitter.

Gaana has reimagined the promotions and brand collaborations in the online musical industry with its internal strength and innovative approach towards creating solutions to build creative client-led innovations in tight timelines like the ones with Cadbury, Nokia, among others. This not only proliferates Gaana’s presence in the industry, but also raises the standards of digital advertising in general.

Gaana has led audience engagement and marketing through multiple unforeseen and futuristic campaigns for advertisers. This stands testimony to Gaana’s commitment of offering high consumer satisfaction at both the user and the advertiser end.