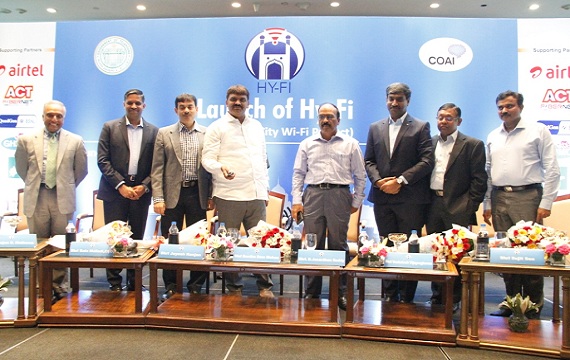 Addressing the gathering on the occasion, Shri Rammohan said, “Being the newest state of the country, Telangana aspires to be the best state in all aspects. Hyderabad has been an inspiration for other cities in IT, business and living standards, and this city will continue to adopt new technologies to uplift the lifestyle of each citizen. Hy-Fi will set another example making Hyderabad a truly connected city even on the digital front.”

In June 2015, under the ‘Digital Telangana’ umbrella, the Government of Telangana has launched the pilot version of Hyderabad City Wi-Fi Project (Hy-Fi). The pilot project saw the government partner with ISPs to provide free Wi-Fi for 30 minutes at approximately 100 public category locations across Hyderabad. These locations include malls, tourist spots, public offices, police stations, government schools and colleges, etc.  Over the last two years, the number has more than doubled to cover about 250 locations. Given the tremendous success the pilot project has seen, the Govt. of Telangana has decided to scale up the project to cover more than 3000 locations across Hyderabad. In fact, a separate Government Order has been brought out specifically to enable smooth execution of the program for ISPs. The Government has agreed to take a two phased approach to complete the Wi-Fi project which is a unique example of government and industry participation for enriching community life and enhancing public safety. At present, over 1000 hotspots are being installed with an assured bandwidth of 5-10 Mbps offering 30 minutes of free Wi-Fi.

Addressing the gathering at the occasion and announcing the launch of second phase of the program, Shri Jayesh Ranjan, Principal Secretary, ITE&C Department, Govt. of Telangana said, “Digital India is the future and Telangana is marching ahead to achieve this dream. Hy-Fi is another pro-people initiative where citizens will avail free Wi-Fi to do their work. Businessperson, shopkeepers, entrepreneurs, students, women and tourists will benefit from this essential service.”

Shri. B. Janardhan Reddy, Commissioner, IAS, GHMC seconded the Mayor and said: “Hy-Fi is another major achievement for the city with the citizens being the major benefactors of the service. With the high penetration of smartphones, free Wi-Fi will be a boost for the people. It will surely enhance the lifestyle of the citizens”.

Shri Rajan S. Mathews, Director General, COAI said “With successful completion of the Hy-Fi project, Hyderabad and Telangana will emerge as an example for rest of the country. It is a proud moment for the state and the telecom industry as well. As partners in this ambitious project, the telecom industry will partner in the timely completion of the project. This will provide high speed internet access connecting citizen with education, commerce and opportunities”.

Mr. Mathews further added that “COAI represents the leading telecom and technology companies across the country and Hyderabad is the city of choice for everything IT. We look forward to working closely with government of Telangana and are proud to be consultants of the government in its endeavour for a fully connected Digital India”.

The program will also be seen as an example of the expertise from government and industry coming together for the larger good of the masses. Highlighting the significant role of the telecom industry, Shri Venkatesh Vijayraghavan, Circle CEO – Bharti Airtel said, “Airtel has been a partner in the Government’s Digital India vision and we are delighted to support Hy-fi, the country’s largest and fastest public Wi-Fi network. With this digital initiative, Hyderabad has further cemented its reputation as one of India’s technology capitals. Together with the Government of Telangana and the industry we are committed to demonstrating endless possibilities of new digital experiences to the citizens of Hyderabad.”

Another unique aspect of the program is the participation of private players who provide the last mile or home connectivity from Information and Communication Technology (ICT). Bangalore-based Atria Convergence Technologies has been selected for bridging the last mile gap in the project. Addressing the gathering Mr. Bala Malladi, CEO – ACT Fibernet said, “With the growing number of citizens moving towards digital economy, our partnership with the Telangana government will bolster the internet connectivity in Hyderabad. With more than 1000 hotspots to be installed in the coming months across the city will enable users to access high-speed internet both inside their homes and on the go throughout Hyderabad”.

Speaking about the project, Shri Sujit Sen, Circle CEO – Indus Towers said, “We are committed to ensure a robust infrastructure for deploying this project and hope that this will act as the foundation stone for other programs driving Digital India in the state.”

With the launch happening on the momentous occasion of World Wi-Fi Day, the CEO of Wireless Broadband Alliance, Shri Shrikant Shenwai said, “With billions of people still unconnected, the greatest threat to the global economy is the vast gap between the connected and unconnected world. World Wi-Fi Day has the vision to ensure everyone get connected and encourages cities, governments and operators to collaborate in ensuring affordable, sustainable connectivity for all. Connectivity is now an essential commodity, much in the same category as power and water and the City Hy-Fi project seeks to address these issues – we congratulate Hyderabad.”