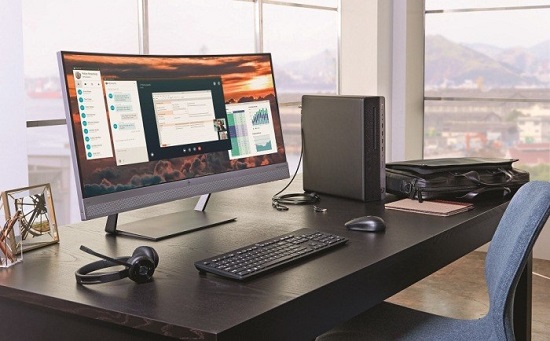 HP announced new commercial desktops and all-in-ones as part of its world’s most secure and manageable PC lineup. In addition to the company’s leadership in security, the new HP Elite desktops and AiOs pack powerful performance and versatile designs that modernize a company’s technology dress code while helping keep devices, data and employees’ identities secure. Desktops and AiOs account for nearly half of commercial PCs sold, representing a critical technology for businesses and organizations. That’s why HP built its new HP EliteDesk 800 Series desktops and HP EliteOne 800 AiO to feature a range of industry and HP firsts, including:
The newly redesigned EliteOne 800 G3 All-in-One is the first commercial AiO with dual-facing cameras, and the first commercial AiO with non-glare touch screen, making this device the perfect companion to greet customers or to easily collaborate with others.
The all-new HP EliteDesk 800 G3 Tower is world’s most powerful commercial desktop, the world’s most configurable commercial desktop, and is the first VR-certified commercial PC – perfect for companies wanting to future-proof their technology and deliver state-of-the-art capabilities. Its smaller sibling – the HP EliteDesk 800 G3 Desktop Mini – is the world’s smallest business-class desktop, and is HP’s most durable ultra-small form factor business-class desktop, ideal for customers who want to hide a desktop behind a monitor or take up minimal space on a desk. Proving that size doesn’t matter, the HP EliteDesk 800 G3 Desktop Mini 65W is the desktop mini on steroids, taking the title of the world’s smallest, most powerful business-class desktop for customers who are tight on space but big on productivity.
More than 100 million commercial desktops still in use are greater than four years old, leaving businesses vulnerable to the 200 percent rise in breaches targeting endpoint devices, and lack the performance and energy savings of today’s devices. When businesses upgrade to the new EliteDesk 800 series desktops and EliteOne 800 AiO, they will have built-in, not bolted on security out of the box, including the world’s first and only self-healing BIOS-level protection withSureStart Gen3 with Runtime Intrusion Detection and recently announced HP WorkWise, the world’s first Smartphone App for PC Tamper Detection.
EliteOne 800 G3 All-in-One is available at a starting price of Rs 62,990 HP EliteDesk 800 G3 Tower is available at a starting price of Rs 41,990 HP EliteDesk 800 G3 Desktop Mini is available at a starting price of Rs 40,990