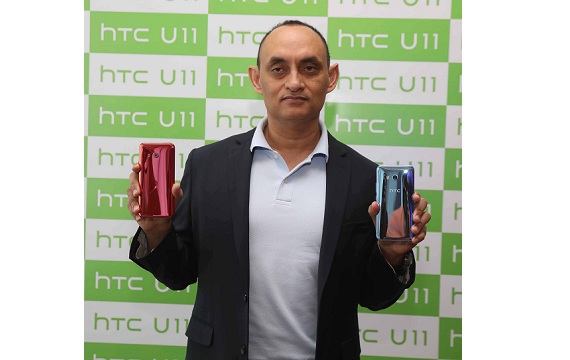 HTC unveiled its flagship smartphone, the HTC U11 priced at INR 51,990 /- (MOP) in India. HTC U11 is the world’s first smartphone with a revolutionary new squeeze technology HTC Edge Sense which gives users the ability to activate advanced touch and use a “short squeeze” as well as a “squeeze and hold” for enhanced functionality. It also has the highest rated smartphone camera in the world with an incredible DxOMark 90 score. The HTC U11 will be available on both online (Amazon.in) and offline channels in India from the last week of June ’17 in Amazing Silver and Brilliant Black colours.

Pre-orders on HTC e-store will start from 17th June and customers availing the pre-order will receive a free HTC flip-cover worth INR 1,999 /-. Customers also have an option to avail 10% cash back on the MOP value of the phone using Standard Chartered Debit or Credit card. This offer is valid for a limited time-period beginning 26th June‘17. HTC U11 comes with the latest version of HTC USonic that combines Active Noise Cancellation with the ability to tune audio to your unique hearing. It also has an IP67 rating and is dust, splash and is also water-resistant2, so no need to worry about splashes, spills or dunks. It is the first smartphone to be commercially released worldwide exclusively powered by the Qualcomm Snapdragon 835 Mobile Platform. Its stunning liquid glass surface is crafted using Optical Spectrum Hybrid Deposition.

With a simple squeeze, HTC Edge Sense lets you easily engage with your phone in an unprecedented yet intuitive way, helping you more naturally enjoy the things you love like taking photos, opening Facebook, or launching any of your favourite apps. Want even more touch control? HTC Edge Sense gives you the ability to activate advanced touch and use a “short squeeze” as well as a “squeeze and hold” for even more functionality at your fingertips. And because Edge Sense is based on pressure applied to the side of the device, it can be used in nearly any condition – including rainy weather that would normally pose a challenge with capacitive buttons.