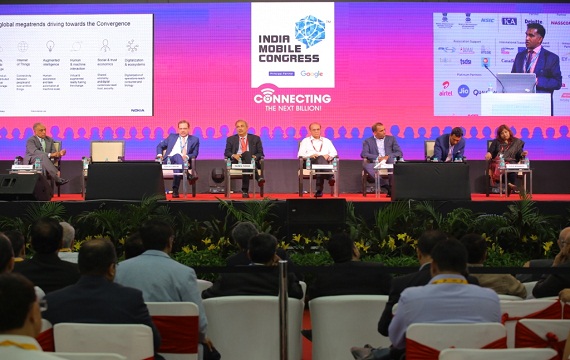 The second day of the India Mobile Congress 2017, the biggest information and communications technology (ICT) event in this part of the world, began with much fanfare. The day started with Union Minister for Railways and Coal, Shri Piyush Goyal’s keynote address. The highlights of the day included the strong presence of Central and State government’s senior ministers and policy makers, along with an overwhelming number of consumers walking in to experience the next generation of technologies on display.

The three-day event being held at Pragati Maidan, started on Wednesday, and has received an unprecedented response, with participation from some of the world’s biggest technology companies, a testimony to the massive interest from the industry and other visitors.

The India Mobile Congress (IMC), organised by COAI and K And D, for the first time in India, has gone above and beyond everyone’s expectations in showcasing India’s prowess in ushering the digital revolution from the very first edition.

Mr Rajan Mathews, Director General of the COAI, the key organiser of the event, while welcoming the delegates said, the India Mobile Congress has brought in global technology companies and leaders on one platform. It will continue to increase engagement amongst the key decision makers and ensure that India becomes a hub for global telecom ecosystem.
“The first day has been a great success with an unprecedented participation from the industry players and the government. Such a huge success is needed in order to establish India as the leader of communications technology globally,” Mr Mathews said. He further explained that the ‘Make in India’ initiative by the Government of India is supporting the Indian industry and this is largely helping Indian products to reach global markets. He also lauded the Hon’ble Prime Minister’s vision of a fully connected and digitally empowered India.

Shri Goyal, the Hon’ble Minister, in his keynote spoke of how mobility would take India to the next level – using both the mobile phone and the railways. He further spoke of how the Indian Railways was increasingly integrating technology into its daily operations and becoming a far more efficient organisation, overcoming legacy issues.

“The Indian Railways was one of the first to start using computers in the 60s while the banking sector only started using them much later in the 90s,” Goyal said. He further added that Railtel, telecom subsidiary of the Indian Railways, which connects around 4,500 towns across the country is further expanding its services to provide Wi-Fi services to thousands of villages enabling digital technology to be available to all citizens in the country at affordable prices.

Ms Aruna Sundararajan, Telecom Secretary hailed the organizers for making the mega-event a success. “What this event has demonstrated is that India is a market of huge interest and many more players want to come here. The response to this IMC event highlights that foreign investors see India as a potential market. This is a great beginning and in the years to come, this event will be established as an eminent event for the mobile ecosystem in India,” Ms. Sundararajan said.

She further informed that in terms of participation there were over 350 exhibitors from 13 countries and eight embassies supporting the mega event with 28 sponsors and around 1200 delegates on Day 1 of the event.
The keynote session of the day also had Mr A.S Kiran Kumar, Chairman, India Space Research Organization (ISRO) who described how technology developed by ISRO for space is being used by everyone, not just for communications but also in the daily lives for improvement of the standard of living. “We have been using mobile technology to help fishermen when fishing in the ocean (to find the best places with the best catch),” Mr Kumar said.

Mr Nunzio Mirtilo, Senior Vice President & Head of Market Area, Ericcson Networks shared his vision of the 5G ecosystem and its potential for innovation and disruption. He further spoke of how video has become the new voice of the Indian youth. Similarly, Mr Sanjay Kamat, Managing Director, Consulting Practice Research, Nokia Bell Labs in his keynote spoke on opportunities ushered in the next era of Artificial Intelligence.

The first part had three sessions with topics pertaining to emerging technologies and 5G, Cybersecurity and the challenge it poses, and Internet of Things (IoT) and how it will change our lives in the coming future.

The third session saw Professor Mischa Dohler of King’s College, London showing visitors how one can even learn to play the piano using IoT.

The sessions were followed by the IMC recognition awards ceremony.

The three day event includes a conclave, an exhibition and an awards ceremony, and also has thematic pavilions and innovation zones, spread across 15,000 square meters, featuring 300 exhibitors from ICT, TMT as well as the Government sector, Embassies and States. The International event is expected to attract more than 500 start-ups, 2,000 delegates from India and other countries with 1,50,000 footfalls, he further added.

The three day event has 21 sessions which will have themes like “Digital India”, “Internet Governance”, “Smart Network: The future of networking”, “Digital Identity for Digital World”, “Women in Tech”, “Cloud & Virtualization”, “Digital Infrastructure towards the Digital Economy” and many others.

“Network Virtualization Services that employ SDN and NFV are finding increased interest and adoption from carriers in India. We are proud to be part of the IMC and the possibilities on how Criterion Networks and CNLabs can help shape the next generation transformation initiatives that enable a new generation of network services in India” said Jayaprakash Kumar, CTO, Criterion Networks.