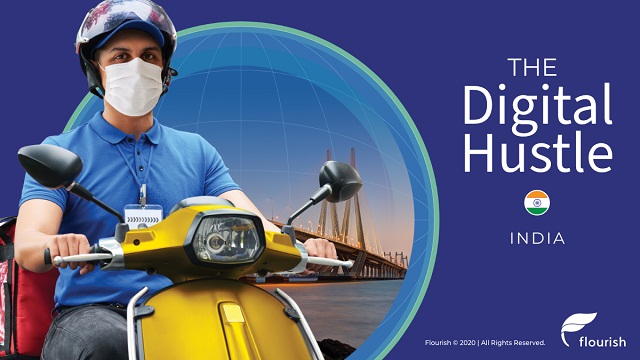 The survey reveals that nearly 90% of Indian gig workers have lost income during the pandemic. These workers often enjoyed above-average earnings before the pandemic, but more than a third surveyed were making less than ₹5,000 (approximately US$68) per month by August. This research also highlighted the potential of Fintech to serve their unmet financial needs and improve their financial security – especially as nearly all intended to remain on digital platforms for gig workers.

This survey of 770 ridesharing drivers, delivery workers, and housecleaners using digital platforms was conducted in August 2020, as COVID-19 cases were surging across in India. Flourish’s series The Digital Hustle: Gig Worker Financial Lives Under Pressure has also surveyed Brazil, Indonesia, South Africa, and is fielding a final installment in the United States.

“Gig workers have been hurting as the COVID-19 crisis has persisted in India, even when they had a financial cushion in the form of government aid or personal savings,” said Tilman Ehrbeck, managing partner at Flourish. “This research reveals most are concerned for their financial future. At Flourish, our hope is that the same digital platforms which enabled the gig economy can connect workers to new sources of income and better financial tools for security in this crisis and beyond.”

As Flourish has found in other countries, ridesharing drivers in India were hit hardest by the COVID-19 economy. Fully 90% reported a loss of income, compared to 72% of house cleaners. Because India’s digital gig economy is dominated by men, fewer women were surveyed. In Indonesia, female gig workers fared the same as men since the pandemic; in India women were more likely to lose income.

As in most countries, the pandemic has affected urban centers more severely than rural areas – and this may be even more pronounced in India. One house cleaner surveyed said, “I returned to my village. I am concerned about going back to Mumbai because everyone seems to have the disease there, but I don’t have an option because there’s no work here. We have to find a way to make money.” 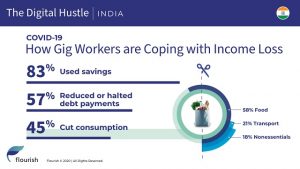 Indian gig workers also seemed to have a larger personal savings cushion than those in other countries. At least 83% have used savings to get through the crisis. In India, 52% of respondents said, if they lost their primary income, they could last at least a month without borrowing. In Brazil, Indonesia, and South Africa, less than 27% of respondents could say the same. 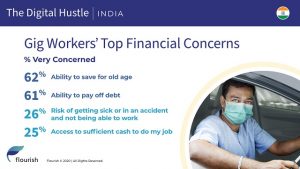 While 45% of Indian gig workers have cut spending, about the same proportion (44%) have borrowed money in the pandemic. Most are concerned with their ability to pay down debt and plan for the future.

The need to manage strained day-to-day cash flows, and better prepare for the future, could be served by Fintech solutions, as gig workers are already digitally connected.

A mobile app could aggregate all of a gig worker’s earnings derived from different sources and nudge workers to regularly put aside small amounts of money into a digital account for future use – such as for debt instalments. Digital platforms could also provide them with small ticket credit to purchase supplies, fill up fuel tanks or learn new skills when needed. 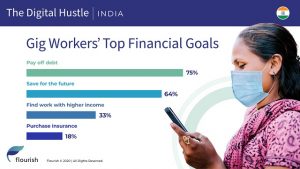 Flourish partnered with research firm 60 Decibels and local partners Avail Finance and Unitus Capital to conduct the online survey of 770 gig workers in August 2020. Of these respondents, 322 were ridesharing drivers, 307 were delivery workers, and 141 were house cleaning workers. To view the full report and access the underlying data, visit:

As part of The Digital Hustle: Gig Worker Financial Lives Under Pressure, Flourish began tracking the experiences of gig workers in five key markets across the globe in May 2020. With each study, Flourish aims to better understand the economic impact of COVID-19 on gig workers, further helping fintech entrepreneurs serve the most vulnerable consumers by examining their changing financial needs.