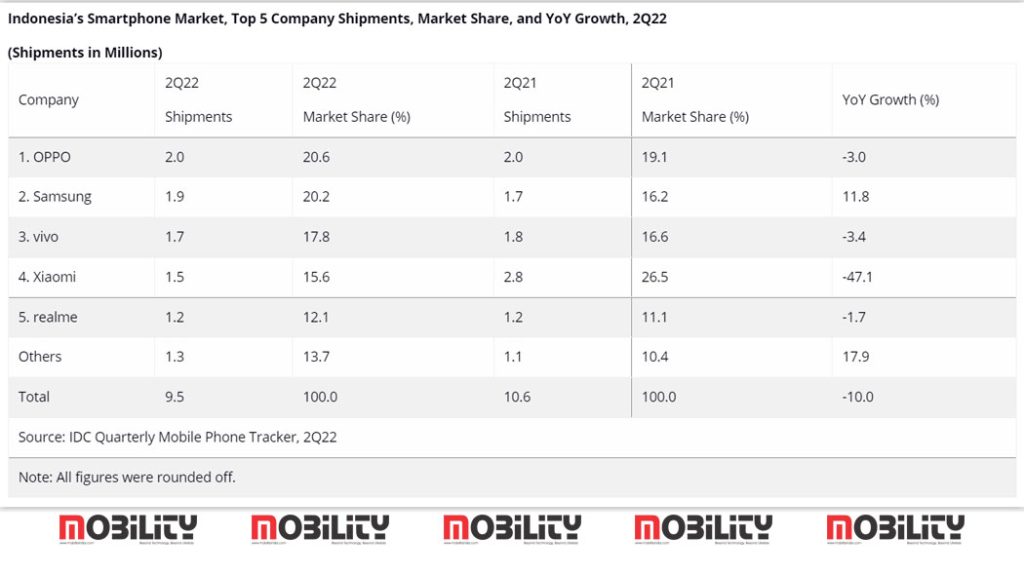 Indonesia’s smartphone market had an underwhelming quarter in 2Q22 as it declined by 10% Year on Year (YoY) despite a Quarter on Quarter (QoQ) growth of 6.9%, amounting to 9.5 million units. Overall, the first half of 2022 (1H22) was closed by 13.7% lower, compared to 1H21, but 3.7% higher than 1H19. Both vendors and consumers geared up for the seasonal Ramadhan period, but faced with a slowing consumer demand.

“In 2Q22, the government lifted the COVID-19 restrictions which allowed people to go back to their hometowns for the first time in two years. As travel expenses increased, people spent less on electronics/gadgets compared to last year. Consumer spending also shifted to other areas such as food and transportation as people went back to normal activities. The increasing price of goods also added a pressure to disposable income, forcing people to prioritize spending on primary needs,” said Vanessa Aurelia, Associate Market Analyst at IDC Indonesia.

The market is expected to stay subdued in 2H22, as macroeconomic factors such as inflation, exchange rate movements, rate hikes, and increasing fuel prices continue to erode consumer spending. With that, IDC expects the overall smartphone shipment to decline in 2022.

OPPO climbed back to first place in 2Q22. OPPO continues to expand its mid-range portfolio (US$ 200-400), with this segment comprising 46.9% of OPPO’s total shipments compared to 18.1% in 2Q21. The mid-range segment was mainly supported by OPPO’s A96 and Reno 7 models. OPPO’s 5G share increased significantly with the Reno 7 model.

Samsung fell to second place in 2Q22. Samsung increased shipments in its mid-range portfolio with the release of the new A and M models, as the segment’s contribution to Samsung’s overall shipments doubled QoQ to 23.2%. Several new A and M series models were offered in 5G variants, which helped Samsung retain the lead in the 5G segment.

vivo held on to third place in 2Q22 with a strong foothold in the <US$ 200 segment, supported by the strong performance of Y15s and Y21 models. On top of that, vivo also released the Y01 to fill in the ultra low-end segment (<US$ 100), replacing the Y1s. vivo’s 5G shipment increased significantly, thanks to the newly released T1 5G and T1 Pro 5G.

Xiaomi, in fourth place, held a strong position in the <US$ 200 segment with the newly released Redmi 10A and 10C. Their flagship products, Xiaomi 12 and 12 Pro strengthened their position in the >US$ 600 segment, as they no longer face supply hindrances in the higher price range. However, Xiaomi’s rank in the 5G segment dropped to fourth as Xiaomi focused on refreshing its low-end 4G models (US$ 100-200) in the quarter.

realme remained in fifth position in 2Q22. The newly released C35 and C31 strongly supported the <US$ 200 segment, along with the older C models. Its mid-range segment showed a significant growth⁠, thanks to the realme 9, Narzo 50, and GT Neo 3T. The new GT Neo 3 also pushed realme’s mid to high-end portfolio (US$ 400-600), while realme’s 5G share grew significantly with models like the GT Neo3, GT Neo3T, and