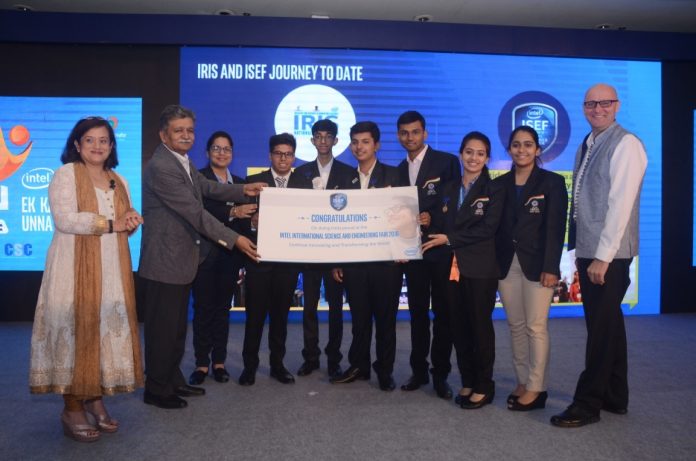 Intel India announced a series of initiatives that strengthen its support for the Digital India programme launched by the Government of India. At an event held today, Intel India detailed three projects designed to accelerate digital literacy  at the grassroots level by reaching out to the population in non-urban India, upskill citizens in tier 2 cities and beyond, and encourage innovation from the local level.

Building on the momentum of its Ek Kadam Unnati Ki Aur initiative to accelerate access to technology in non-urban India, Intel India e-launched its latest ‘Unnati Kendra at Common Service Centre’ (UK at CSC) in Karnal, the first in Haryana. This ‘UK at CSC’ will serve as one of the common access digital learning centers for people of the state and Intel India aims to open several more of these facilities in the state. Based on a strong public private collaboration, and the government’s vision of “Sabka Saath, Sabka Vikas” that stresses upon collective effort for inclusive growth, Intel India is working with the government to open a network of up to 100 ‘UK at CSC’ facilities across ten states this year, with 10 such facilities already set up in the state of Telangana. At these facilities, Intel India is providing access to devices, relevant local content and training for citizens that will also help them develop and nurture their self-expression and creative capabilities. Trained personnel at these centres are also conducting in-depth sessions on digital literacy, computer skills and internet facilities, along with dedicated guidance sessions in entrepreneurship, language and vocational training, with the goal of creating opportunities for non-urban education, employment and empowerment.

Intel India also announced the Digital Unnati website, being set up in collaboration with the CSC e-Governance Services India Ltd. It will enable Village Level Entrepreneurs (VLEs) to learn how to assemble a PC online and upskill their technology know-how.

In addition, inspired by the overwhelming response and the success of the first chapter of the Intel & DST – Innovate for Digital India Challenge (“Challenge”), Intel India is laying the groundwork for launching the Challenge later this year. This Challenge supports local innovation and entrepreneurship and is a nationwide competition inviting technology solutions to solve real problems faced by our citizens.

Intel India recently announced the three winning teams of the 2015 Challenge viz: teams TJay, Asha+, and Jayalaxmi Agrotech. These teams developed commercially viable strategies and prototypes based on Intel® architecture and with the engineering support, expert mentoring  and access to funds from Intel. They have created solutions for the agricultural and healthcare sector and will now have access to equity investments of up to INR 2,000,000 per team from CIIE to take their products to market.

Speaking at the event, Mr. Robby Swinnen, Vice President, Sales & Marketing Group, and General Manager, Intel Corporation, Asia-Pacific & Japan, said “Intel has been a fervent supporter of India’s digital inclusion agenda over the past many years. We are thrilled to see the progress made through our collaboration with the Government of India on various initiatives like Digital India, that are bringing technology and innovation mainstream in India. Intel India’s focus on accelerating Digital India is not only contributing to empowering people with crucial digital knowledge, but is also strongly aligned to our vision of connecting everyone with technology as we progress towards a smart and connected world. ”

Ms. Debjani Ghosh, Vice President, Sales and Marketing and Director, Intel South Asia, said, “Intel India is fully committed to achieving the realization of a truly Digital India and has been supporting this vision by fostering innovation and upskilling of the non-urban population. In a country as diverse as ours, we believe that successful public-private collaborations will be the catalyst towards driving technology-enabled inclusion and transformation at the grassroots level. We envision digital infrastructure as a utility that is crucial for the economic success of the country on the foundation of Sabka Saath, Sabka Vikas.”

Intel India is also actively involved in digital literacy programmes, policy advocacy and facilitating technology-driven inclusive growth. Through programmes such as the National Digital Literacy Mission, and the Disha Digital Literacy Programme, Intel India has upskilled 80 lakh citizens in India till date, providing further impetus to the Digital India charter, as well to the Pradhan Mantri Kausal Vikas Yojna, which is focused on skill development in the country.