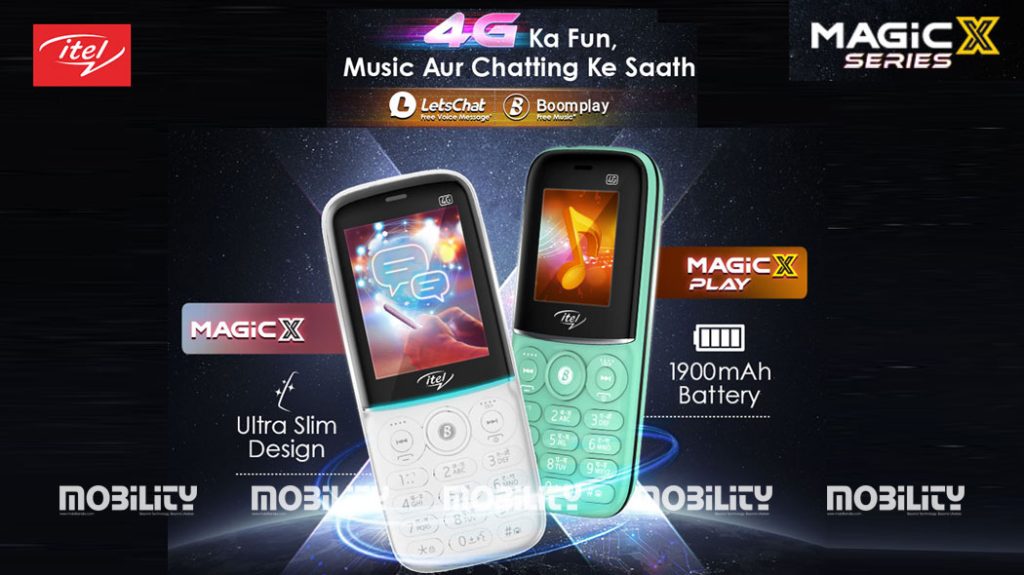 itel the leading mobile brand for Bharat brought another big innovation to the feature phone market in India with the launch of its Magic X series. Staying committed to fuelling the aspiration of Bharat, itel today announced the launch of Magic X Play and Magic X. These new-age feature phones come with the inbuilt chatting application LetsChat and music app Boomplay with dual 4G VoLTE. These phones are available at a compelling price point of INR 2099 and INR 2299 respectively.

Unlike any other feature phone, itel users will be able to make friends across the globe and even create chat groups through its LetsChat application. itel’s feature phones are amongst the pioneer brands in India that provide options like voice messages for the consumers to chat freely with voice notes and help them to stay connected with their family and loved ones using itel devices.

Another path-breaking feature of Magic X Series is the Music app Boom play. When the Industry norm for the user is to depend on FM Radio or preloaded songs in memory for music, Magic X makes it possible for the users to listen to online music, which is a big advantage in the entertainment-starved segment. The in-built Boomplay allows the users to enjoy 74 million plus songs across the globe in different genres like Movies, Bhakti etc.

While Magic X Play is power packed with 4G VoLTE technology and boasts a 1.77-inch 3D curved display, Magic X has a compact ultra slim design with 2.4-inch 3D curved QVGA display and smart LED alert. Both phones have an inbuilt wireless FM radio, LED torch and KingVoice assistance. The Magic X series is one of the few feature phones in India that not only provides features similar to a smartphone but also assures high-speed connectivity with 4G technology for consumers to always stay connected and enjoy activities online on the go.

itel has also ensured a powerful battery backup in both phones. Magic X Play has a 1900mAh battery and the compact Magic X flaunts of 1200 mAh battery backup. Through the launch of the Magic X series, itel has once again showcased its prowess in innovation building feature phones that are equivalent to any smartphone and are pocket-friendly.

Commenting on the launch, CEO, itel India, Mr Arijeet Talapatra, said, “In the era of Smartphones, feature phones are still relevant to certain user segments, especially those at the bottom of the pyramid, rural users, the ones who find it easy to use and also who want to keep feature phones as their secondary device. Being the No 1 Feature phone brand with over 25% market share, itel continues its vision of empowering the aspirational Bharat with its cutting-edge technology and innovations. itel keep on working towards bringing the best for this segment and the launch of the Magic X series is a testimony to that. Magic X series has been curated for our consumers who are looking for user-friendly and premium 4G devices for their digital needs. “