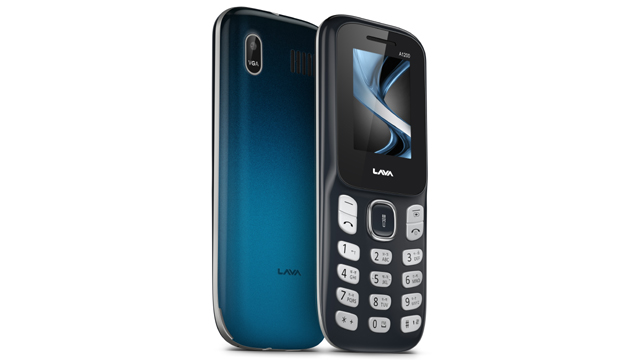 Indian Mobile handset maker Lava International Limited, announced the launch of its new feature phone- Lava A1200 with a powerful 1750mAh battery, giving a battery backup of 7 days* on a single full charge with 1.5 hours of daily calling. The Lava A1200 also comes with an industry-first Smart Battery Indicator powered by Artificial Intelligence Technology in feature phone segment which shows no. of days & hours of battery life left on the basis of actual usage pattern of the phone by the consumer.

This dual SIM phone comes embedded with multiple features which are far superior compared to its counterparts in the same segment. High on durability, the outer body of the phone is made with Pure Polycarbonate material (same type of material used in manufacturing of helmets/fighter jet windshield glass), giving it greater strength and a solid build. The gradient finish on the back of the phone gives it a highly premium look. The Lava A1200 is available in two variants- Ocean Blue & Rose Gold and is priced at Rs. 1250.

A-class speaker-receiver is used in the phone for clear calling experience. The phone also comes with an inbuilt Bluetooth functionality for ease of sharing of contacts, files (photos/audio/video) from one phone to another. With an expandable memory support of up to 32 GB, the feature phone sports an audio & video player with more than 100 dB sound, allowing users to enjoy their favourite music and video at an affordable price with good sound loudness & quality. The Lava A1200 comes with a screen size of 1.8” inch along with a VGA rear camera to click quality pictures and save the images against the contacts in the phone.

Commenting on the launch Tejinder Singh, Head- Product, Lava International Limited, said-“Lava has always maintained a very strong presence in the feature phone market. Our New offering- Lava A1200 is a result of our continued efforts in Research & Development along with new innovations. We understand our customer’s need of a durable phone with an exceptional battery backup along with superior design & call clarity. The Lava A1200 is just that- 7 days of battery with an industry-first smart battery indicator powered by AI technology & an exceptional experience of calling. We are sure this feature phone will be far ahead of its competitors in the segment”

The Exchange offer enables the customers to exchange their old Samsung or Lava feature phone & get Rs. 400 off on purchase of a brand new LAVA A1200. This exchange offer is also applicable on Nokia and itel handsets; with every exchange of old Nokia and Itel handsets, customers can avail a discount of Rs.250.