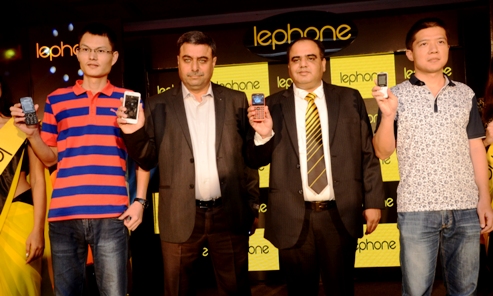 Chongqing Blephone Technology, a China-based company, launched its range of highly affordable, sleek and feature intensive mobile phones. Dubbed as the aam aadmi ka phones, they will be sold under the popular brand name of Lephone. These entry level phones will be available at a staggering Rs 799 while their smart phones will begin at an equally jaw-dropping price of Rs 1999.

“The amazing thing about our phones is that they are customized according to the needs of the ‘common man’ and are manufactured in India on the line of Make in India policy of the Government of India. Our aim is to offer a range of phones that caters to the needs of the entire spectrum of the aam aadmi at affordable prices.” Amit Saxena, VP, Marketing of Lephone India announced at the press conference.

Lephone is a redoubtable mobile brand around the world, having sold over 50 million phones in the last ten years. It is sold in as many as 33 countries, with South Asia, the Middle East, South America and China ranking among its biggest markets. The company has an annual turnover of USD$ 4300 million, with a year on year growth rate estimated at a whopping 150%.

The Chinese behemoth, established in 2005, began its operations in India this February by setting up its office and factory. It moved rapidly since then, registering the brand in March, producing its first made-in-India phone in April and setting up its distribution and service networks by July. Today, Lephone already has 33 affiliates and over 500 dedicated service locations in India to cater to its customers well before the official launch.

“Our goal is to become among the top five brands in the Indian mobile handset business in the next three years. We will achieve this by offering superior value and higher customer satisfaction through innovative products and personalized services on the phones. We are launching in a small way from UP today but we plan to have a national distribution footprint before Diwali this year. We will have over 300 distribution partners and around 25,000 retail outlets by then,” Vinod Pandit, GM, Sales said.

The feature phone variants of K1, K1P and K3 will not only be reasonably priced, they will also have sleek designs and provide greater battery life and extendable memory support. The most exciting feature of Lephone K3 variant is it being the ‘senior citizen phone’ which is one of its kind in the market. Priced at Rs 1499 MRP, the K3 is equipped with large screens (6cm-2.4) with easy to read querty and single menu icons for hassle-free usage. The five option SOS button makes K3 a sure winner for women and senior citizens from the safety point of view.

Their smart phones look set to make inroads into the market share of established players, with a mouth-watering range between Rs 1999 MRP and Rs 4,999 MRP with 3G capability. Their 4G phones begin at Rs 2,999 MRP while their most expensive phone is only Rs 9,999 MRP. It’s not just the attractive pricing though: the phones, with all their features, are expected to give every phone in the market a run for their money.