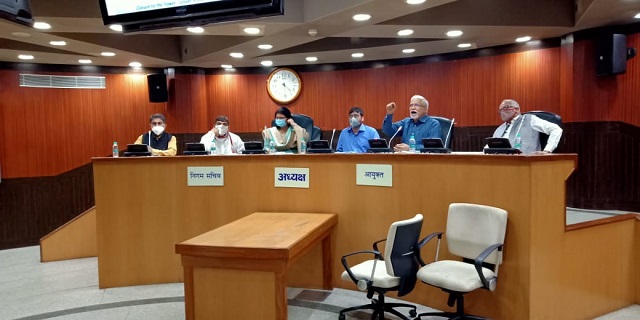 The Delhi Licence Service Area (LSA) unit of Department of Telecommunications (DoT) in association with South Delhi Municipal Corporation (SDMC) organized an “Awareness Workshop on Radiation from Cellular Mobile Towers” under the chairmanship of Hon’ble Mayor Anamika Mithilesh Singh. This session was organised as part of DoT’s public advocacy programme designed to dispel myths around EMF radiation and to quell unfounded fears of citizens, supported by credible scientific evidence.

An expert panel comprising of senior officers from the telecom department along with doctors, addressed the concerns of the citizens and debunked various myths around health hazards from mobile tower radiation.

Shri Kamal Deo Tripathi, ADG emphasised the importance of a mobile tower and how well-entrenched infrastructure was a prerequisite for streamlining network connectivity.  He said, “In India, the EMF radiation norms are 10 times stricter than the limits prescribed by the International Commission on Non-ionizing Radiation Protection (ICNIRP) and is recommended by the World Health Organisation (WHO). Delhi LSA has done EMF testing of over 43,000 telecom towers across Delhi LSA so far and all of them have been found compliant with Indian EMF norms.”

Dr T K Joshi, Special Advisor to Health Minister, Govt. of India also stated that, “The EMF Project of WHO, after two decades of extensive research, has corroborated that there is no evidence to support the claim that exposure to low-level electromagnetic fields is harmful to human health. The WHO has studied over 25,000 articles and reached the conclusion that there is no correlation between mobile tower EMF emissions and its hazardous impact on human health.”

Citizens need not worry about the adverse effect of mobile tower EMF radiation as they are been strictly monitored and evidence from credible sources have repeatedly ruled out the possibility of any impending health hazards emanating from EMF radiations. Network connectivity is imperative for a connected future and a healthy infrastructure will support the advancement of many technologies, which in turn would enhance the way we all live and work.