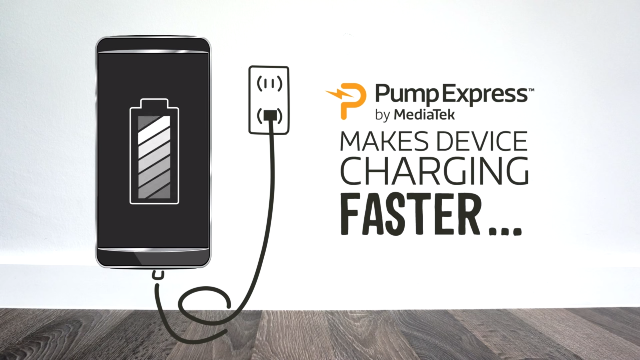 MediaTek, a pioneering fabless semiconductor company and market leader in cutting-edge systems-on-chip (SoC), developed Pump Express 3.0 to charge a smartphone battery from zero to 70 percent in as little as 20 minutes. That’s almost twice as fast as competing solutions currently on the market and five times faster than conventional charging. With Pump Express 3.0 users can charge for five minutes and talk for four hours.*

“The engineering challenge in the smartphone world today is satisfying consumer demand for powerful, rich multimedia features without needing to plug in their phones all day long,” said Jeffrey Ju, Executive Vice President and co-Chief Operating Officer. “Our technology lets consumers power up quickly to stay connected, on the go and using their favorite applications whether for work or play instead of tethered to an outlet.”

Pump Express 3.0 is the world’s first solution to enable direct charge through Type-C USB power delivery. Direct charging bypasses charging circuitry inside the phone and prevents the device from overheating while also routing electrical current from the adaptor directly to the battery.

Pump Express 3.0 is an ultra safe charging solution with bi-directional communication and 20-plus safety and device protection systems built-in, including preventing device or charger overheating issues. MediaTek uses its own SoC technology in combination with technology advancements from Richtek, a company MediaTek recently acquired, to control heat issues and quick charge devices.

“Pump Express 3.0 is another example of MediaTek bringing better experiences to device makers and consumers,” said Ju. “We continue to push the limits of what technology can do without making it complicated for the end user.”

MediaTek Pump Express 3.0 technology will be available in the MediaTek Helio series P20 with devices expected to be in the market by end of 2016. It will also be available in future smartphone chipsets and can be added to MediaTek smartphone SoCs upon request by customers.