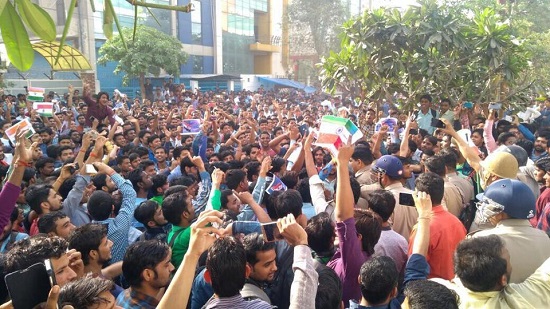 Uttar Pradesh police have started investigating the incident of monday night as a senior official from China allegedly tore the national flag in the factory premise. Workers said that the official dumped the National Flag, hoisted inside the factory, in a dustbin, after tearing it.
Police was also deployed to control the crowd and took up the case later, after a group of workers lodged a complaint against the official concerned. The incident had an adverse effect on manufacturing activity at the Oppo unit because of the protests. Several other offices in the vicinity also shut down anticipating trouble.

The facility at Noida, Sector 63, was set up recently. Oppo manufactures handsets here for local consumption.

Over 200 police personnel were deployed to bring the situation under control. A case has been filed by the police against the Chinese employee.
A senior official from OPPO said,

“We at OPPO India would like to restate our deep respect for India and the people here.

Since our establishment in India, OPPO has been committed to the development of the industry

and local communities. Our priority is the wellbeing of our employees and the community we

service. Based on the recent incident and after thorough investigation with the concerned authorities,

material check. OPPO India regrets this unfortunate incident and reaffirms that this is an

individual’s behavior that in no way represents our company’s position. We have ZERO

continue working very closely with the authorities on the matter. OPPO has deep respect for India and its culture. OPPO continues to obey the applicable laws and regulations in India and will not tolerate any misconduct.