OPPO to Leads ‘Made in India’ Smartphone Shipments in Q1 2022 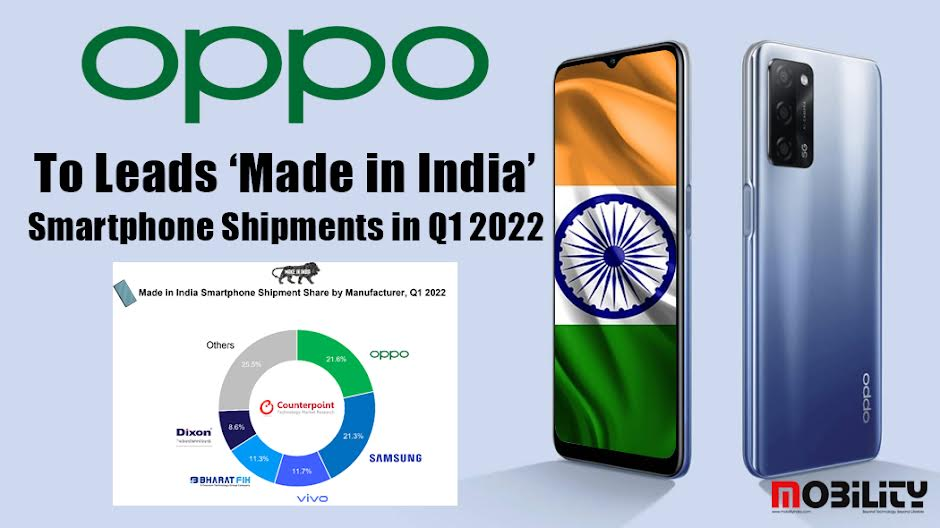 ‘Made in India’ smartphone shipments grew 7% YoY in Q1 2022 to reach over 48 million units, according to the latest research from Counterpoint’s Make in India service. The local smartphone manufacturing ecosystem stayed resilient amid global component shortages.

Commenting on the local manufacturing ecosystem, Senior Research Analyst Prachir Singh said, “Smartphone manufacturing is increasing in India. In 2021, the shipments of ‘Made in India’ smartphones crossed 190 million units. The increasing smartphone demand in India as well as increasing exports are the major reasons for the continued growth. Support has also come from the Indian government’s various initiatives to increase local manufacturing. However, the manufacturing of feature phones declined 41% YoY in Q1 2022 due to falling demand for the past few quarters.”

On the Indian government’s initiatives, Research Analyst Priya Joseph said, “The government’s focus has been to make India a manufacturing hub. It has taken a lot of initiatives in this direction. The Production Linked Incentive (PLI) scheme for mobile handsets proved to be an accelerator for local manufacturing. Similar PLI schemes have been introduced by the government in other strategic sectors, such as solar, semiconductors, automotive and electronic products. In the current times of uncertainties triggered by the pandemic, war and other factors, the government feels it is important to have a resilient economy that can sustain such shocks. Signing up for the recent Indo-Pacific Economic Framework for Prosperity (IPEF) is one such example of the government’s intention to make clear its goal of becoming the next tech hub.”

Going forward, we believe India’s handset manufacturing will grow 4% YoY in 2022. Also, the increasing local value addition will drive the idea of “Aatmanirbhar Bharat” (Self-reliant India). The government is focusing a lot on increasing localization, and with the Semiconductor PLI, it aims to make India a prominent destination for semiconductor and electronics manufacturing.