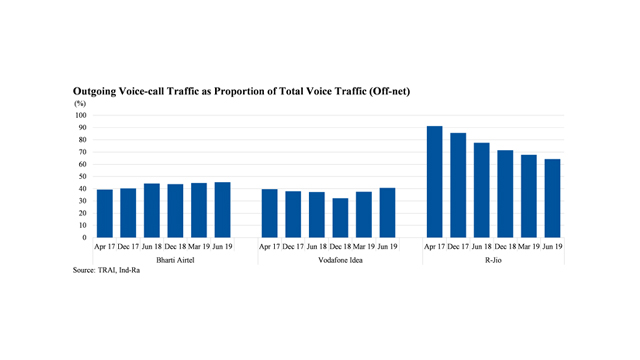 The levy of additional charges by R-Jio will discourage users to call other operators from R-Jio, possibly leading to lower voice traffic on R-Jio network and hence could constrain the telecom giant’s actual EBITDA benefit at 8%-10%.

India Ratings and Research (Fitch Group) believes Reliance Jio Infocomm Ltd’s decision to start charging INR 0.06/minute through top-up vouchers on outgoing voice calls to other networks would improve its average revenue per user (ARPU) by about INR9 and EBITDA by 15%-18% in FY20, assuming that usage/calling pattern remains the same and the zero interconnect usage charge (IUC) regime is postponed beyond its scheduled date of 1 January 2020. However, the levy of additional charges by R-Jio will discourage users to call other operators from R-Jio, possibly leading to lower voice traffic on R-Jio network and hence could constrain the telecom giant’s actual EBITDA benefit at 8%-10%.

Also, Vodafone Idea Ltd (Voda-Idea) and Bharti Airtel Ltd (Airtel) may see lower incoming calls on their network, which may impact their net interconnect user charge (IUC) income, which stood at 3% and 10% of total revenue for Airtel and Voda-Idea, respectively. Furthermore, Voda-Idea and Airtel may continue to lose their subscribers to R-Jio as the pricing arbitrage (i.e. outgoing voice calls to other network being free on R-Jio and chargeable for other operators) is removed. On the flipside, R-Jio’s tariff-hike may give Voda-Idea and Airtel an opportunity to increase their tariffs and repair their balance sheets. However, Ind-Ra believes the benefits for Voda-Idea and Airtel would be short-term and the marginal recovery of around 10% in ARPU may not help in addressing the unsustainable debt levels, and improve credit metrics. Ind-Ra has maintained a negative outlook on the Indian telecom sector due to intense competition, elevated debt levels and continued reliance on capital infusion for debt servicing and capex.

Network Imbalance Higher for R-Jio: In Q1FY20, outgoing calls as a proportion of total offnet minutes of usage (MoU) for R-Jio, Voda-Idea and Airtel stood at 64%, 41% and 45%, respectively. Also, of the total offnet voice traffic, net incoming MoU as a proportion of total offnet MoU stands at negative 29% for R-Jio whereas the same is 9% and 19% for Airtel and Voda-Idea respectively, implying that network voice traffic imbalance is significantly higher for R-Jio compared with peers. Hence, R-Jio remains a net-payer of IUC expenses, whereas Voda-Idea and Airtel are net-receivers of IUC receipts. The move by R-Jio to start recovering IUC from customers would address R-Jio’s concerns that the zero IUC regime may get postponed by Telecom Regulatory Authority of India beyond its scheduled date of 1 January 2020.

Eventual Benefit Contingent on Many Variables: Estimating the impact of R-Jio’s levy of IUC charges on ARPU and EBITDA is tricky given that it may lead to a change in usage and calling pattern. The impact on Airtel and Voda-Idea’s financials is yet to be seen given that they have not yet announced their strategy in response to R-Jio’s move.

Broader Impact on Industry Tariffs: R-Jio’s tariffs have been 25%-30% lower than those of Voda-Idea and Airtel since the last two years, which has kept the competition intensity high. However, after falling steadily over the last 2.5 years, data tariffs (expressed in terms of GB per user per month) raised 11%-17% during October 2018-February 2019, and have been stable since then. Ind-Ra believes the industry-wide debt levels are at unsustainable levels and a marginal recovery of 10% in ARPU may not help in improving the credit metrics. Telcos will continue to rely on external funding to support their debt servicing and elevated capex requirements. Any investment in spectrum acquisition or 5G technology may derail this fragile recovery.

OPPO to Leads ‘Made in India’ Smartphone Shipments in Q1 2022