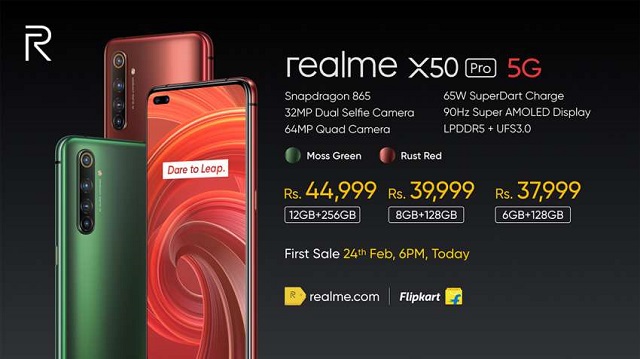 realme has started rolling out the update for realme UI 2.0 for its 5G flagship realme X50 Pro 5G starting today. Based on Android 11, the realme UI 2.0 is one of the most customizable and seamless OS in the market, created for a highly personalized UI experience for the Gen Z user. realme is constantly striving to enhance the user experience of its customers, and therefore has been persistent in tech innovations.

realme has worked closely with Google and was one of the first phone manufacturers to provide Android 11 to its users after Google officially released it in September. The realme UI 2.0 is based on three pillars, which were segmented from the Gen Z consumer requirements i.e. creativity, sociality, and productivity. The upgraded realme UI 2.0 meets the diversified requirements across these categories.

With the realme UI 2.0, customers can choose notification bar colours, shortcut buttons, settings for interface icons, and other 23 interfaces. realme UI 2.0 also offers exciting features that enhance social media experiences. For example, the new subtitle stitching feature allows users to share favourite movies and lines seamlessly, while the Dual-mode music enables sharing of favourite tracks with friends. With the support of Deepsea Privacy Plan and Security Shield, the realme UI 2.0 assures that the user’s data and information are safe and secure.

The realme UI 2.0 also offers a 45% improvement in system resource utilization, resulting in a 32% increase in system speed and a 17% increase in frame rate stability over the previous generation. realme X50 Pro, with Qualcomm Snapdragon 865, the first 5G flagship smartphone in India was launched in February this year with the previous edition of the realme UI based on Android 10.