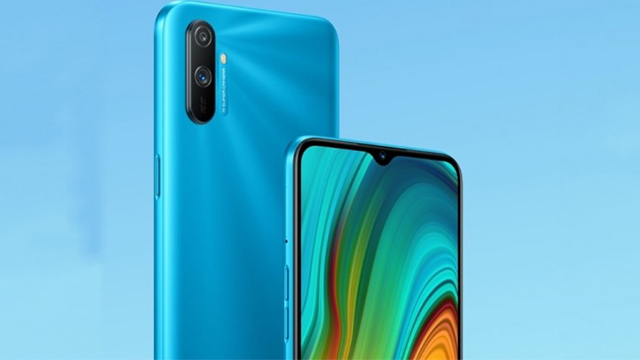 realme, the fastest growing smartphone brand, announced the launch of ‘Entertainment ka Superstar’ – realme C3 which is the most powerful entry-level smartphone under 8K. realme C3 is an addition to realme’s entry level all-rounder the C series smartphones, which has 10.2 million users across the globe and has successfully disrupted India’s entry-level segment of smartphones. realme C3 is a Superstar in 4 key areas – Performance, Battery, Display and Camera. As a first in its segment, the C3 features the world’s first MediaTek Helio G70 processor which will ensure powerful and speedy performance for both mainstream users and gamers, alike. The realme C3 has been launched in 2 exquisite colours – Blazing Red and Frozen Blue. With first sale on February 14th, 2020, realme C3 will be available in two variants – 3GB + 32GB, priced at INR 6,999/- and the 4GB + 64GB is priced at INR 7,999/. The Entertainment Ka Superstar – the realme C3 will be available on flipkart.com, realme.com and at select partner stores from its first sale.

Commenting on the launch of realme C3, Madhav Sheth, Vice President, realme and Chief Executive Officer, realme India, said “Continuing our dare to leap dictum, we are delighted to introduce India’s Entertainment Ka Superstar – realme C3 which is a combination of both power and style. Our entry level C series smartphones have received a phenomenal response from our loyal users as we have clocked in 10.2 million sales and we hope the realme C3 will continue our streak and make this series a winner. From a market share of 3% in 2018 to 10% in 2019, we have grown a massive 255% over last year and have made huge strides in a short span connecting more & more consumers to the beauty of technology. The growth of realme was driven by an aggressive go-to-market strategy that involved launching several industry-first features with a strong design language. ”

Stylish Design & Display
realme C3 comes with the biggest display in this segment with a 6.52″ HD+ mini drop display which is 30.9% smaller than the normal dewdrop, making the screen to body ratio as high as 89.8%. This big screen will enhance the viewing experience while watching movies, playing games or scrolling through social media.
The design inspiration of the exciting new colors Blazing Red and Frozen Blue of realme C3 has come from hot lava and cold glacier. Both the color variants have been designed with Dazzle Light Texture technology. The exquisite optical texture implemented on the plastic mold has been done by combining polishing, radium carving and sandblasting technology.

Best-in-class Performance:
The realme C3 is world’s first phone with MediaTek Helio G70 processor which is the best in this segment and has a MediaTek Gaming Technology to optimize network latency. It is an eight-core 12nm processor that clocks up to 2.0 GHz, making it one of the fastest and latest in its category. The realme C3 is ideal for mainstream smartphone users and elite mobile gamers with an efficient, high performance ARM Mali-G52 GPU.

The realme C3 has Antutu benchmark scores of over 1,93,000 giving the best performance in this segment, which is much higher than any phone in this segment. As for high speed connections the phone features a dual Wi-Fi, allowing the phone to seamlessly switch to the optimal band providing a faster connection.

Adding on to multimedia usage, the realme C3 has the Display Latency Optimization of MediaTek Helio G70, which gives faster response time, more accurate screen control and thus increases the fluidity of the touch screen. Further enhancing the visual experience, the MediaTek Helio G70 has Premium Picture Quality that supports True Color. With better screen contrast, the output is brighter and gives clearer picture while gaming and watching videos – giving realme C3 an advantage of a better range of vision that other models cannot see.

The realme C3 will be available in 2 variants powered by the LPDDR4X RAM. Compared with LPDDR3, the graphic performance is improved by 20% and RAM performance by 100%. The realme C3 also features triple card slot with a dual SIM slot and a dedicated SD card slot expandable up to 256GB.

Massive Battery
realme C3 features a huge 5000mAH battery with which one can enjoy nonstop entertainment. With realme C3 one can joyfully talk for hours, stream YouTube videos, listen to music, play games, and navigate for hours without any interruptions. It also supports reverse charging, which means it can charge other devices like a power bank.

Dual Camera
The Entertainment Ka Superstar features 12+2MP Dual rear camera setup. The rear main camera features a F1.8 large aperture and a large 1.25μm pixel size. It can zoom up to 4X and supports PDAF autofocus. This makes the pictures clear in daylight and bright in low light & dark environments as well.

The realme C3 has exciting features like Chroma Boost, portrait mode and slow motion video recording, which is difficult to find in this segment. The Chroma Boost feature, through the pixel-level mapping algorithm, restores the brightness and color, giving better dynamic range, screen contrast and vivid colors.

Apart from this, the camera supports an automatic HDR mode. When turned on, one can keep the highlights and dark details in the picture to get accurate images with abundant details and more colors. The camera also supports 1080p video shooting and slow motion videos at 120 fps.

On the front, it has a 5MP Selfie camera. The selfie camera supports AI beautification function, HDR mode, portrait mode and a Panoselfie feature that can take wider selfies.

realme C3 with realme UI update
realme C3 is the first realme smartphone to be launched with realme UI which is based on Android 10 and ColorOS 7, realme UI is well-built for an enhanced and closer to stock Android experience.

realme UI with Quantum Animation Engine – In terms of system animation, realme UI is equipped with the latest quantum animation engine, which improves the screen fluency.

Focus Mode – Turning on the “Focus Mode” can help users isolate themselves from the outside world, and the system will simultaneously play some relaxing music. This will turn on DND (Do Not Disturb), preventing new notifications from swarming in, and one of the four built-in tunes can be chosen to dive in relaxing zone.

Three-finger screenshot gesture – Just use 3 fingers to take a screenshot, press and hold on screen, then swipe to capture the selected part of the screen. No more cropping is needed, and taking a partial screenshot is done with just one step.