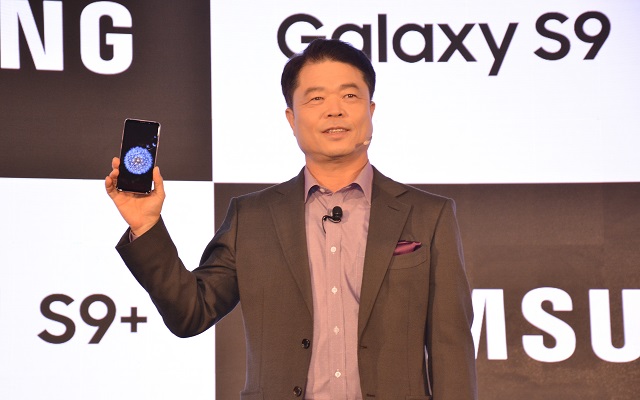 Samsung Electronics launched its flagship smartphones, Galaxy S9 and S9+ in India, with the world’s best camera featuring a Dual Aperture lens, Super Slow-mo capability, AR Emojis that look like you, and stereo speakers tuned by AKG with Dolby Atmos®, among other path-breaking features, reimagining the way people communicate, share and experience the world.

The smartphones have also been reimagined for India with a slew of ‘Make for India’ features that will delight Indian consumers. With Carrier Aggregation, Galaxy S9 & S9+ will be able to stream data 2.5 times faster. They will come bundled with several exciting offers as well as Samsung’s very own loyalty program, Samsung Rewards.

Mr. HC Hong, President and CEO, Samsung Southwest Asia, said, “Galaxy S9 and S9+ are made for today’s age where communication and expression is increasingly happening through images, videos and emojis. India has one of the highest number of social media users, is one of the biggest 4G data markets and one of the fastest growing cashless economy in the world. With Galaxy S9 and S9+, we have reimagined the smartphone for today’s and tomorrow’s India, so that you can ‘Do what you can’t.”

Galaxy S9 and S9+ herald the next level of innovation with Samsung’s advanced camera that has been redesigned with a new Dual Aperture lens that powers a super low light camera like no other smartphone, Super Slow-mo video capabilities at 960 fps and personalized AR Emoji that ensure users do not miss a moment and make their everyday epic.

“Galaxy S9 and S9+ are smartphones in a class entirely of their own. With the camera reimagined, now consumers can shoot photos and videos like they can’t with any other smartphone. With cool features like Super Slow-mo and AR Emoji, consumers can express themselves in a way that’s unique and personal to them. Through our partnership with leading operators, Galaxy S9 and S9+ consumers can experience data speeds like never before for faster downloads and uninterrupted streaming. We have also reimagined how you can own these devices with retail and operator partnerships. With this launch, Samsung will further consolidate its leadership in the flagship smartphone segment in India,” said
Mr. Asim Warsi, Senior Vice President, Mobile Business, Samsung India.

The smartphones will be available in India starting March 16, 2018, the same day as the Global Launch, in three distinctive colours—Midnight Black, Coral Blue and a new hue, Lilac Purple. They will be available at select retail stores and online exclusively on Samsung’s official online store Samsung Shop and Flipkart.

The 256GB variant of Galaxy S9+ will be sold exclusively at Reliance Digital stores, Samsung exclusive stores and on Samsung Shop.

Samsung has reimagined how users can own Galaxy S9 and S9+ with a range of partnerships delivering immense consumer value.

Users can get a cashback of INR 6,000 when they purchase the device by scanning the Paytm Mall QR code at select retail stores.

They can alternatively get a cashback of INR 6,000 if Galaxy S9 and S9+ are purchased using ‘No Cost EMI’ on HDFC Bank debit and credit cards. They will also be eligible for the cashback when making a full payment using HDFC Credit Cards or by paying through HDFC CD Loan.

Under the Samsung Upgrade program, loyal Samsung Galaxy users will be eligible to get additional INR 6,000 bonus over the regular exchange price when they upgrade to Galaxy S9 or Galaxy S9+.

Galaxy S9 and S9+ users on Jio get an exclusive offer of 1 Terabyte of high speed 4G data with unlimited voice & SMS for one year worth INR 15,000 at only INR 4,999. The users can now enjoy uninterrupted digital services without any daily data usage limit. Additionally, users are entitled to complimentary Jio Prime Membership as a part of this offer.

Galaxy S9 & S9+ users, who are new or existing customers of Vodafone, will get free subscription to Netflix for a year on Vodafone Red plans starting INR 999 till April 30, 2018. Also, prepaid users who recharge with INR 199 get unlimited voice and 1.4GB/day and an additional 10GB free data every month for their next 10 recharges.