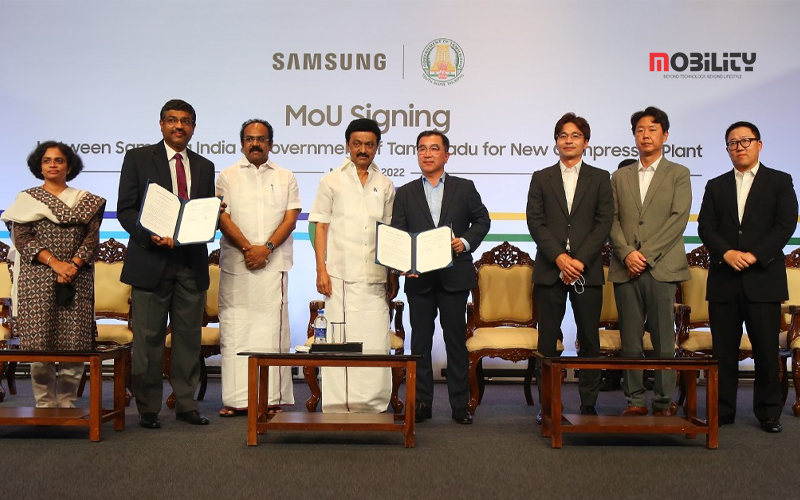 Samsung, announced an investment of INR 1,588 crore in India to set up a new compressor manufacturing plant in Sriperumbudur, near Chennai.

The new facility, spread over 22 acres, will have a capacity to produce 8 million compressor units a year, which will be expanded in the future. Compressors produced at the plant will be used in refrigerators that Samsung manufactures in India and also be exported.

On Tuesday, the Company signed a Memorandum of Understanding (MoU) with the Government of Tamil Nadu for the new plant, expanding and strengthening the component ecosystem in the state.

Mr MK Stalin, Chief Minister of Tamil Nadu said,“Samsung has been a shining example in Tamil Nadu’s industrial growth story, driving investments and creating jobs. This new investment is yet another step by Samsung towards strengthening the manufacturing ecosystem in the state.”

Mr. Ken Kang, President and CEO, Samsung Southwest Asia, said, “This new investment of INR 1,588 crore is a testimony to our continuing commitment to the people of Tamil Nadu, who have been our longstanding partnerssince we set up our factory in 2007. Over the years, we have received strong support from the state and local authorities, helping us drive our vision of ‘Powering Digital India’. This new compressor manufacturing facility will help us cater to the growing demand for Samsung’s innovative digital appliances across the country and also drive exports.”

Set up in 2007, the manufacturing facility in Sriperumbudur is one of two factories that Samsung operates in India.Samsung’s flagship consumer electronics products that include luxury redefining QLED TVs, lifestyle TV The Frame, innovative Curd Maestro Refrigerators, AI Ecobubble Washing Machines with bi-lingual user interface and WindFree ACs are manufactured at this plant. Some of these innovative digital appliances are exported to other countries.

Since its entry into India in 1995, Samsung has set new benchmarks in innovation led manufacturing and consumer marketing, and established itself as a national brand. It has consolidated its market leadership in the country with two factories, in Noida, near New Delhi and in Sriperumbudur, five R&D centers and one design center. These are supported by a strong network of over 200,000 retail outlets and over 3,000 customer service points.