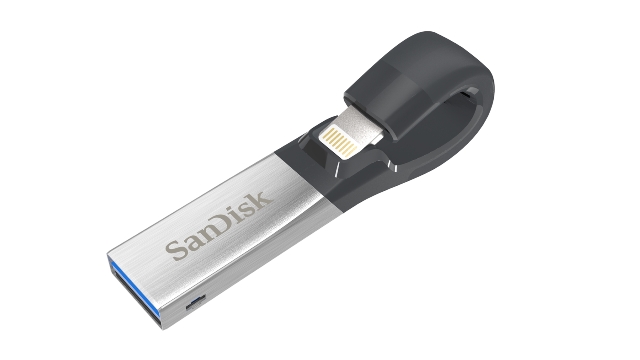 SanDisk  launched the next-generation iXpand Flash Drive, a mobile storage device designed to help people quickly and easily free up space on their iPhone and iPad  with up to 128GB of additional capacity. The iXpand Flash Drive features a new, modern design that fits with most iPhone and iPad cases, a USB 3.0 connector for faster transfer speeds to Mac or PCs, and a completely redesigned app to easily manage photos, videos and music.

According to a recent consumer survey on the ‘Storage Consumption needs of the Indian consumer’ conducted by AMI for SanDisk India, many iPhone users are looking to free up more space on their phones. “People are using their mobile phones to capture tons of photos and videos, and about 70% of iPhone users in India run out of memory every week and end up deleting files,” said Rajesh Gupta, Country Manager – India & SAARC, SanDisk Corporation.

“Our line of mobile storage offerings can immediately help them free up space. With the new iXpand Flash Drive, people can spend more time using their iPhone to capture what they love, and less time worrying about how and where to transfer these photos and videos.” he further added.

Designed to be the perfect storage companion for iPhone and iPad, the reinvented iXpand Flash Drive features a flexible Lightning connector and now a USB 3.0 connector so users can quickly and easily move photos and videos between their iPhone and iPad and Mac or PCs. The iXpand Flash Drive allows users to automatically back up their camera roll and contacts, and watch popular video formats3 straight from the drive. The new drive also includes encryption software that password-protects files, allowing people to share their content while keeping sensitive files secure across devices4.

The product features a redesigned app, the iXpand Drive app, which offers new features and an improved user experience. Giving users the option to save space instantly, the app now has a camera function so users can shoot and save photos or videos directly to the drive instead of on their iPhone or iPad. The app also allows users to automatically back up content from popular social networking sites, as well as play back music within the app.

Built for the next-generation iXpand Flash Drive, the iXpand Drive app is available for download from the App Store for iPhone and iPad. The app launches when the iXpand Flash Drive is plugged into an iPhone or iPad – allowing for immediate storage expansion, access to the user’s content and easy file management.