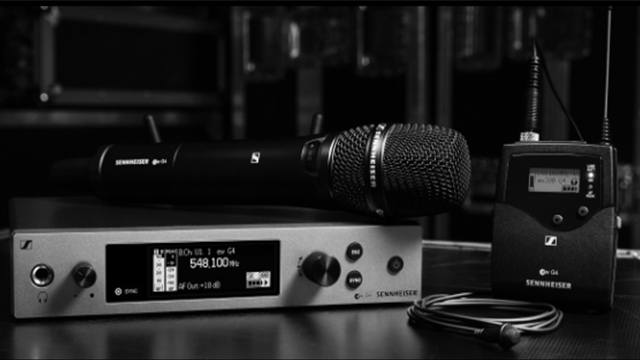 Evolving with the needs of the people and taking ahead the wireless revolution, German audio-giant, Sennheiser recently launched the evolution wireless G4 fat the PALM Expo 2018.Sennheiser’s evolution wireless portable systems have been an industry standard wireless solution for media, content creators as well as small and medium-sized broadcasters worldwide.
To be made available in a fourth generation, videographers will also get to enjoy the all new EW 500-p series which will help them create content by further professionalising film work. Additionally, the new G4 series will be fully compatible with all previous evolution wireless generations, safeguarding any earlier investments.

With 2018 marking the 20th anniversary of evolution, the new EW 500 p series features exciting set components such as the MKE 2 lavaliere mic, making it an idol choice for professionals.Launched in 1998, Sennheiser’s evolution line has served as the most successful microphone series to date.

Commenting on the launch, Mr. Vipin Pungalia, Director Professional segment, Sennheiser India said, “With over a 70-year history that has been built on the culture of innovation and a vision to shape the future of the audio industry, we at Sennheiser have always strived to understand the needs of our consumers and provide them the best. We believe in evolving with the passion and aspirations of the audience, and with that in mind, we have come out with evolution Wireless G4. It not only demonstrates our dedication to creating the ultimate audio experience through excellent sound quality and user-centric design, but also marks our commitment to evolving with both its current customers and those of the coming generations.”

Mr. Raghu Dixit, leading Indian musician said, “As a musician, I understand the importance and necessity of good audio, as it can make or break our performance. The reason I prefer Sennheiser is because they also understand the value of audio systems and the impact they can create. As a result, their products are built with a consideration of the needs of people like us and a vision to make us have a worthwhile experience. What I genuinely appreciate the most is the commitment and dedication Sennheiser has to evolve with the consumers – this helps us in evolving our music, performance and art. Hence with the launch of Sennheiser evolution wireless G4, I am confident that it will definitely shape the future of audio with ground-breaking technology which will in turn help us focus on our performance better and not worry about the sound quality.”

A familiar family evolves with some significant additions
Evolution wireless G3 users will recognize the familiar 100, IEM, 300 and 500 sub-series – but there are some important additions: There are brand-new professional sets for ENG and film work in the 500 series, three new Base Sets in the 300 series, as well as upgraded Vocal Sets and a new Combo Set in the 100 series.
Evolution Wireless G4 retains all of G3’s best features while simultaneously providing many system improvements. It comes with more power, more flexibility, more bandwidth, quicker setup, full integration and full mobility.

For any live performance: 100 and 500 series
Bands, houses of worship and community theatres will find their ideal wireless solutions within the 100 G4 and 500 G4 series.
The 100 series comprises Vocal Sets that include the acclaimed capsules of the evolution e 835, e 845, e 865, e 935, and e 945 microphones. Also available are an Instrument Set, a Headmic Set and two Lavaliere Sets with either the ME 2-II (omni) or ME 4 (cardioid). All transmitters and the receiver are also available separately.

Compared to G3, the 100 series impresses with new multi-channel capabilities: Up to 12 wireless systems can now be daisy-chained for simultaneous programming via an enhanced Easy Set-up function. The daisy-chain cable comes included, as do rack-mount ears for professional use. The orange LCD display of G3 has been replaced with a high-contrast black and white LCD display. Also new are a sync LED and an Escape button for more convenient and quicker operation. The 100-series handheld features a new lightweight aluminium housing, and a programmable mute switch for singers or speakers seeking full control of their audio signal. Also new is a 100 series Combo Set that includes a rack-mount receiver, a handheld transmitter with e 835 capsule, and a bodypack transmitter with ME 2-II clip-on.

The ew G4 500 series is ideal for bands, theatres and houses of worship that require an expanded feature set, greater range, more spectrum flexibility, and the additional control options offered by the Wireless Systems Manager software. Available systems include Vocal Sets with e 935, e 945 and e 965 capsules, an Instrument Set, a Lavaliere Set with professional MKE 2 clip-on, as well as individual receiver and transmitter units.

500 series users are now greeted with a brand-new, contrast-rich black and white OLED display with automatic dimming, a convenient jog wheel, blue Sync LED, red warning LED and an Escape button that makes navigation much easier. The switching bandwidth of the series has been expanded considerably to rival Sennheiser’s professional 2000 series, with bandwidths of up to 88 MHz and up to 32 channels. The RF output power has been increased to 50 mW, switchable in three steps (10, 30, 50 mW) to expand transmission range or adjust to difficult RF environments, and all bodypacks feature increased protection from humidity and moisture.

Wireless monitoring: the evolution wireless G4 IEM series
The IEM series receives similar enhancements to user-friendliness as the 500 series: a contrast-rich black and white OLED display, a convenient jog wheel, automatic dimming, blue Sync LED, red warning LED and an Escape button for quick and easy navigation. The RF output power has been increased to 50 mW, and the bodypacks come with protection from humidity and moisture – ideal for stage work. Individual units are available, as are a single and a Twin IEM Set.

Compared to the 100-p series, the 500-p systems operate with a higher switching bandwidth of up to 88 MHz (compared to 42 MHz) and thus a higher channel count. Additionally, the systems feature a selectable output power of up to 50 mW and are less sensitive to moisture. All 100-p and 500-p series components are also available separately.

For business and education: the 300 series
Targeting users in corporate, hospitality and education settings, the 300 series comprises a Vocal Set with an e 865 microphone head, a Lavaliere Set with the ME 2-II clip-on, and a new Headmic Set which includes the SL HEADMIC 1, the pro’s choice for speeches and lectures.

Also new in the series are the Base Sets, which provide a cost-efficient way to update or expand existing evolution wireless systems. All Base Sets include a receiver and transmitter but come without the microphone or the microphone head, ready for use with existing accessories. There are Base Sets that include a handheld or a bodypack, or a Combo Set with both options. Handhelds, the body pack and the receiver can also be ordered separately.

The 300 series features an increased switching bandwidth of up to 88 MHz or up to 32 channels, allowing for large set-ups in multiple rooms. The series features the same new user interface and increased output power of 50 mW as the 500 series. The bodypacks’ protection against humidity has been improved too. An integrated network port allows for remote control and monitoring via the Wireless Systems Manager or the convenient Sennheiser Control Cockpit software. Meanwhile, the receivers are ready for integration into the LSP 500 PRO wireless loudspeaker system.