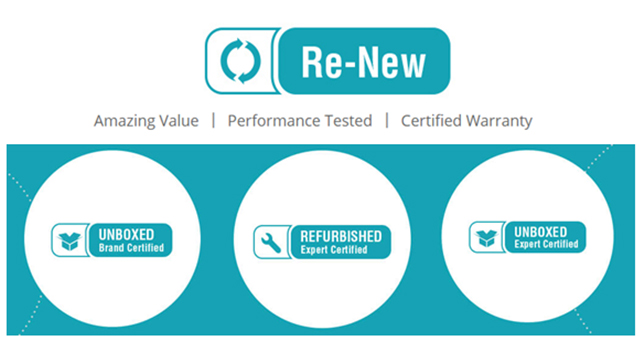 Refurbished and Unboxed devices are the next big trend in India. Being the market leader it is, ShopClues, India’s first online marketplace, has honed in on this huge business opportunity and emerged the undisputed leader in its Re-New gadgets category. It clocked a huge INR 4.5 crores in sales from refurbished and unboxed electronic devices alone, including laptops, smartphones, and tablets, for the month of July. It is also targeting to double its GMV growth with a 16 million customer target in 2018.

Refurbished smartphone volumes grew by close to 25% in 2017 and crossed 12 million units in India, with more than a third accounted for by Apple and Samsung, according to Counter-point Technology Market Research. Comparatively, the segment’s growth across global markets last year was 13%, reaching almost 140 million units.

Looking at the huge global as well as domestic potential for refurbished goods, ShopClues also plans to grow this category in India to include a larger universe, ranging from TVs to watches and more.

“ShopClues had long identified the massive opportunity around the Refurbished category; specially the renewed smartphones segment, which according to industry estimates, is set to grow by over 27% in 2019. We have almost doubled our customer base from 8 million to 16 million within 2 years and our success has given us confidence to offer more than 400 stock selling units from different brands in the smartphone category. Also, soon ShopClues will be launching a full assortment of Laptops and TVs from HP, Dell, Apple, Asus, Lenovo, LG, Sony and Samsung for its customers,” said Radhika Aggarwal, co-founder & Chief Business Officer, ShopClues.com.

ShopClues is the market leader in this category, and is providing Re-New Gadgets at affordable prices ranging from 779 INR to 80,000 INR along with quality assurance. The company is also offering a six months to 1-year warranty, varying with products called “Shopclues Assure”.

ShopClues’ continued focus on Tier III and IV towns has paid off and it is now offering on its platform, top smartphone brands such as Apple, Samsung, Xiaomi, Lenovo, Motorola, Vivo, Oppo and Huawei, amongst others, to shoppers here.

Shopclues sold 5,780 refurbished phones – primarily Nokia and Samsung – in Tier II and III markets every month this year, which is 35% higher than the average, over 2017.ShopClues establishes leadership in the Refurbished and Unboxed Gadgets category.