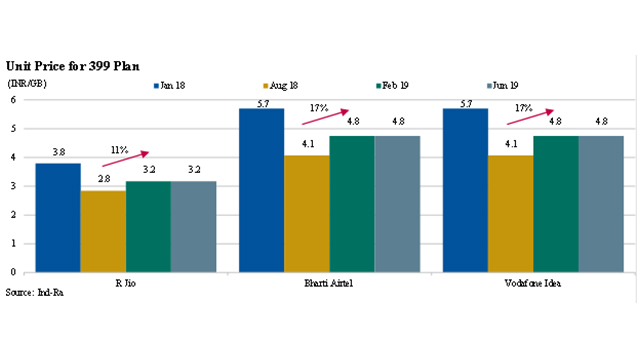 India Ratings and Research (Fitch Group) believes that, despite stabilisation of mobile services revenues in 4QFY19, the credit profiles of telecom players (telcos) will remain under pressure in the medium term due to the high competitive intensity, elevated debt levels and continued reliance on capital infusion (promoter equity infusion, asset monetisation) for debt servicing and capex.

India Ratings and Research (Fitch Group) believes that revenue recovery may continue going ahead, albeit at a slower pace, as the proportion of high ARPU subscribers in the data and broadband (3G+4G) categories continues to be low at 40-44% and 30%, respectively, of overall subscriber base. Also, after falling steadily over the last 2.5 years, data tariffs (expressed in terms of GB per user per month) rose 11%-17% during October 2018-February 2019, and has been stable since then. Nevertheless, R-Jio’s data tariffs remain at a discount of 25-30% to Bharti/Voda-Idea; this has enabled the former to continue to garner market share aggressively, signalling that competitive pressure has not yet subsided. Furthermore, while the average revenue per user (ARPU) for Bharti and Voda-Idea increased by 17-19% qoq in 4QFY19, the growth was optical, as incoming-only subscribers were weeded out of the system through the implementation of minimum recharge offerings.

According to Ind-Ra, the likely recovery in profitability, if any, may not be sufficient to address credit concerns such as high leverage, elevated capex, sustained negative free cash flow and the imminent need for asset monetisation. While near-term liquidity issues have been addressed through capital infusion and asset monetisation, the business model is unlikely to become attractive unless players record a substantial improvement in profitability.

Between March 2019 and September 2019, Bharti and Voda-Idea lost 50 million and 88 million subscribers, respectively,, predominantly due to the implementation of minimum recharge plans at end-3QFY19. However, the removal of low-ARPU / incoming-only customers led to a sharp rise in their ARPU. Ind-Ra believes that, with the subscriber base likely to stabilise at current levels, any incremental tariff hikes would be revenue accretive. As per Ind-Ra’s analysis, none of the players have announced any cuts in their tariffs from February 2019.

For Bharti and Voda-Idea, the proportion of data subscribers in total subscribers increased rapidly to 41-44% in 4QFY19 from 28-33% in 1QFY19. The share of broadband (3G+4G) also increased meaningfully to 31-33% in 4QFY19 from 17-22% in 1QFY19. Bharti has been a reporting steady growth in data traffic, and with average monthly usage of 11 GB/user, overtook R-Jio in data consumption. The rising share of high-ARPU data subscribers along with rising data traffic and stabiliaing data tariffs augur well for future revenue growth.

Despite the likely stabilisation of revenues and possibly profitability, telcos would continue to rely on external funding arrangements to support their debt servicing and elevated capex requirements. While R-Jio has spun-off its fiber and tower assets into separate special purpose vehicles (SPVs), Bharti and Voda-Idea have concluded rights issues of INR250 billion each. The pipeline for asset monetisation remains strong, with the initial public offering of Bharti’s Africa business and fiber/tower monetisation of Voda-Idea. In spite of these capital infusions, the credit metrics of telcos remain at elevated levels, and a material improvement in profitability would be essential for an improvement in their credit profiles.

Spectrum Auction and 5G roll-out May Derail the Fragile Recovery

As per media reports, the government of India may auction 4G and 5G spectrum in October 2019. Any incremental spending for the acquisition of additional spectrum along with investments in 5G technology may further stretch the balance sheets of telcos, and derail the recovery process. However, the auction may not garner adequate interest as telcos are still optimising their existing spectrum; moreover, spectrum pricing continues to be matter of concern, and 5G technology has still not been finalised.