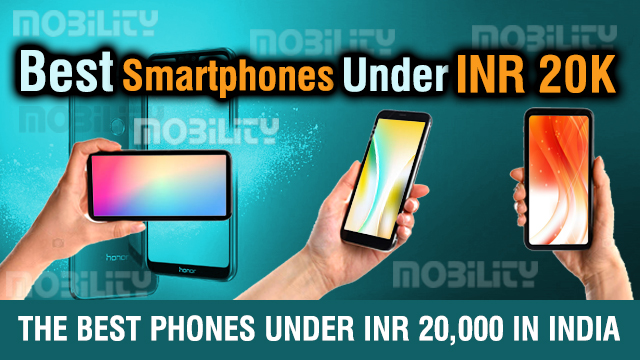 There used to be a very clear divide between mid-range and high-end smartphones. The great news is that the lines have increasingly blurred over the past few years. Today, it is easy to find a phone with a great camera, excellent build quality, and powerful hardware at a fraction of the cost of a flagship. Here are the best phones under 20,000 rupees in India!

Poco’s first-ever launch, with the F1, was all the rage and really brought home the fact that you could enjoy flagship performance at an affordable price point. It took a while for the company’s next release, and there were major upheavals along the way. Unsurprisingly, one of the most anticipated phones of the year doesn’t fail to deliver, even if the Poco X2 takes things in a new direction.

Poco’s latest continues to compete in the premium mid-range category but with specifications that are par for the course in this price range. Offering high-end features in the mid-range category is what Poco is known for, and that comes in the form of a great 120Hz display. Solid performance and good cameras, including dual front-facing shooters, round out one of the best phones under 20,000 rupees that you can get.

The competition is completely cutthroat in the mid-range segment. Realme, in particular, has been on a roll with a steady launch schedule that constantly ups the ante. Things are no different with the latest device from the company, the Realme 7 Pro. We actually see quite an interesting mix of specs and features with this phone.

It’s not surprising that the processing package is the same as the 6 Pro since the latter launched in India just a few months ago. What is surprising is that Realme has gone in favor of a display with an AMOLED display this time with a standard 60Hz refresh rate.

Realme says that it made this choice because consumers prefer AMOLED over LCD, even if they got faster refresh rates with the LCD panel. You also don’t get dual front-facing cameras with the 7 Pro, but its selfie shooter is now a 32MP unit.

Of course, Realme is known for bringing flagship features to the mid-range, and the 7 Pro is no different. It comes in the form of the 65W fast charging here. You can charge the phone up to 50% in just 12 minutes, and a full charge will take slightly more than half an hour.

Even though its successor is now available, the Realme 6 Pro remains an excellent option to consider. Of course, given that it’s only a few months older than the 7 Pro, it’s not surprising that there’s some overlap.

You get the same processing package with both, and the high-end iteration comes with the same RAM and storage. The primary rear shooter is also identical, but the 6 Pro has dual front-facing selfie shooters. One advantage the 6 Pro has is the fact that its display has a 90Hz refresh rate. On the other hand, the 7 Pro screen is of the AMOLED variety, while this is an IPS LCD panel.

Both phones have their pros and cons and are priced almost the same too. What is not an issue is that both the Realme 7 Pro and 6 Pro are two of the best phones you can get for under 20,000 rupees in India.

If Redmi isn’t setting market trends in the mid-range segment, it certainly doesn’t fail to keep up with them. In fact, there isn’t a whole lot that makes the Note 9 Pro Max stand out from the crowd, at least on the surface. A solid mid-range processor, similar RAM and storage options, quad-cameras on the back, and even a side-mounted fingerprint scanner are features shared with other devices on this list.

Unfortunately, you don’t get higher display refresh rates here. That said, there are a couple of things that make the Note 9 Pro Max different. The front-facing camera is now housed in a centrally-placed punch hole. Redmi isn’t afraid of loud and bold designs usually. However, it goes the opposite route this time around and opts for a classy elegance that looks fantastic. The phone also comes with a larger battery than most other similarly-priced options.

Samsung made a comeback in the affordable segment in India with the popular M-series. The company has released successors for most of these phones, and leading the charge in the budget-friendly segment in the Galaxy M31.

The Galaxy M31 isn’t a big upgrade over the Galaxy M30s. The biggest upgrade is in the camera department, with the M31 tacking on a fourth camera and upgrading the primary shooter to a 64MP sensor. You also get more RAM with the newer device, as well as the latest version of Android out of the box. If you’re a fan of everything Samsung has to offer, the M31 is a great choice in this price range.

Poco follows up the fantastic X2 Pro with an even more affordable alternative that is worth considering — the Poco M2 Pro. This phone is the company’s take on the Redmi Note 9 Pro, but offers amped-up charging and an ad-free experience. Granted, the phone is a play on an existing formula but the end result is a better product for the buyer and there’s little to complain about that.

The Poco M2 Pro offers a lot of value for money, if performance and excellent battery life are what you seek. It may not have the high refresh rates of the Poco X2 or the Realme 6 Pro, but the phone is a significantly cheaper alternative to both. If you’re considering getting the Redmi Note 9 Pro, the Poco M2 Pro is certainly the better way to go as well.