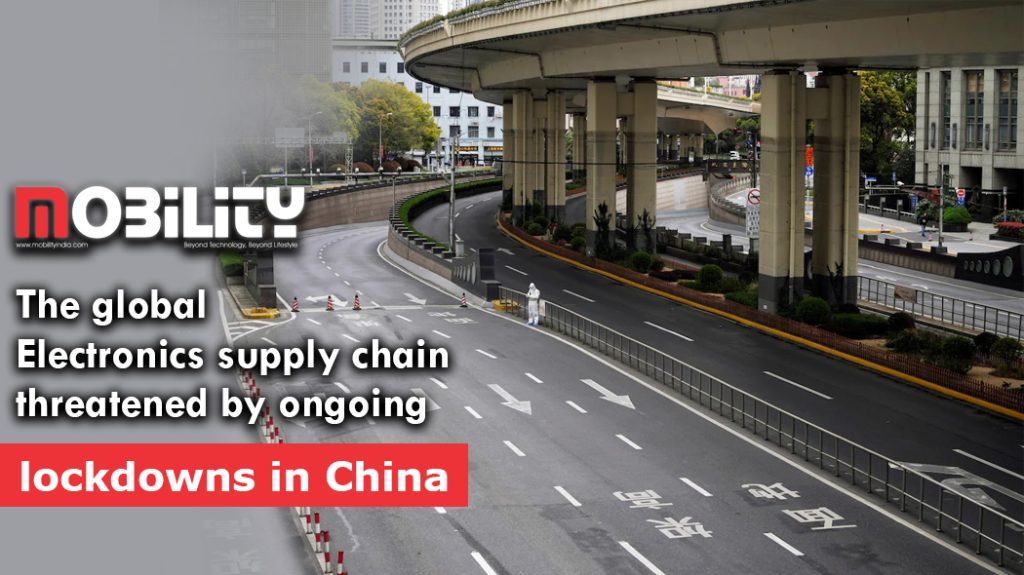 China’s economy made a solid start to the year, recording first-quarter growth that surpassed expectations. But a recent slump in consumer spending and rising unemployment suggests much tougher months ahead with dozens of cities still under Covid lockdowns.

Major cities in China are implementing restrictive measures to halt the spread of COVID-19 under the country’s “zero COVID-19” policy. In the lockdown areas, city residents are under orders to stay in their homes. Many major manufacturers of essential electric components and car parts are located in the lockdown regions, and several factories in the regions have shut down because they are unable to recruit workers from outside the cities to keep the plants operating.

In some factories, employees have stayed and continued production. But with lockdowns continuing for extended periods, and even expanding into neighboring cities, the procurement of components to feed factory lines has been disrupted, Omdia indicated.

The lockdowns are also causing logistics issues. Truck drivers transporting products from factory to factory, or from factory to port, across city boundaries have been ordered to take daily COVID-19 tests. Drivers at risk of infection must be quarantined. Delays in customs clearance in Shanghai and nearby ports are also causing disruptions, as are transport restrictions in Kunshan.

Despite the transportation issues caused by a shortage of truck drivers, companies can operate their factories for the time being using their inventories. But safety stocks will only be able to support plant operations for a finite period, and the impact on production will increase if the lockdowns continue for an extended period, Omdia warned.

Nitto Denko’s polarizer backend process factory is located in Shanghai. Polarizers for game consoles, smartphones, and Apple MacBooks and iPads are processed in Nitto Denko’s Shanghai backend process line, and they are shipped to the panel module line. If the Shanghai lockdown continues until the end of April, the disruption of supply could impact the production of MacBooks and iPads for April, according to Omdia.

Nitto Denko does have other backend process factories in Shenzhen and Vietnam, but it would be challenging to immediately provide backup for the Shanghai facility because of limited available capacity, Omdia said. Notably, Shenzhen was already in lockdown for seven days in early March, and it currently is working to make up for production lost during that period.

There are plans for production in areas that are not in lockdown, but the backend process factory is located close to the panel module line to reduce logistics and other costs. For this reason, it is not easy to use other polarizer manufacturers’ factories or supplies sourced from other regions, Omdia continued.

Outside of Shanghai, Heungmei Optoelectronics (HMO, formerly Kunshan Chimei), the second polarizer supplier in China, has two lines located in Kunshan, mainly producing TV polarizers. However, because of the rapid spread of the COVID-19 in nearby Shanghai, the entire city of Kunshan went into lockdown from April 6.

The original plan was to lock down the city until April 12, but as the situation in its neighbouring city Shanghai is getting worse, the lockdown will likely be extended to April 19, raising concerns about the production disruption of TV panels, Omdia indicated.

HMO mainly supplies polarizers for large TV panels and provides polarizers to most Chinese panel makers, including CEC-Panda, CHOT, China Star, HKC, and SIO, Omdia said. Since most panel makers have about two weeks of polarizer inventory, the lockdown in the Kunshan area has not immediately impeded panel production. However, if the lockdown is longer than the original schedule, the HMO inventory held by panel makers could run out by mid-April, Omdia noted.

Moreover, HMO’s inventory of subfilms is short as ports are closed, Omdia continued. Assuming that the polarizer supply is stopped for April, the TV panel production area may decrease by over 5% in the second quarter of 2022.

The Guangzhou area is also likely to be in lockdown, with school classes having already moved online. Shanjin Optoelectronics has a production site in Guangzhou, with two lines in operation. In addition, two lines have been relocated from South Korea to China and are preparing for mass production in 2022. If the plant shuts down because of lockdown, polarizer production from two existing lines will decrease, and the stabilization of the new line will also be more delayed than expected, according to Omdia.

Panel makers are already turning to other polarizer makers to ensure supplies of polarizers, and they are trying to order more quantities to ensure safety inventory, Omdia said. Currently, panel makers are requesting Taiwan-based CMMT, Sunnypol, BQM, and Samsung SDI to increase polarizer production to compensate for the decrease in HMO production.

However, transportation restrictions are increasing supply chain risks as well as transportation costs, which could lead to a rise in the polarizer price. The situation even though has improved a bit over the past few months but now with the series of lockdowns in China again the situation is deteriorating.