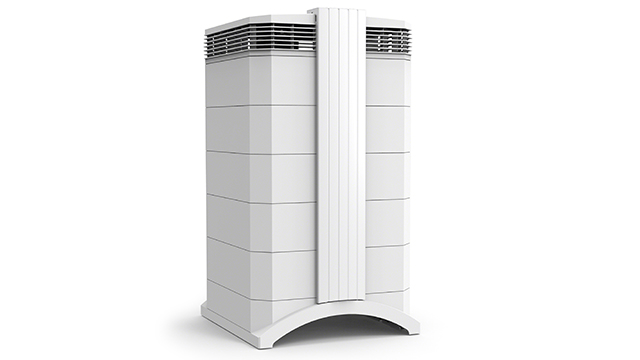 With Delhi experiencing severe AQI (Air Quality Index) on several occasions this season, IQAir HealthPro250 air purifier seems to have the answer to many issues associated with airborne pollution. The price of IQAir HealthPro250 is Rs 1,40,000.

IQAir, a 55-year-old Swiss manufacturer of premium room and personal air purifiers is brought to India by BreatheEasy (India’s leading indoor air quality experts). The IQAir HealthPro250 is designed with a 3-stage filtration process that cleans the full spectrum of airborne pollutants through a series of high-quality filters manufactured by IQAir to be the best in each category.

• Micro-Particle Filtration: The IQAir HealthPro250 PreMax pre-filter is the first stage of filtration, the air is drawn in through the air intake, the PreMax pre-filter eliminates micro-particles such as pollen, pet dander and mould spores.
• Granular Activated Carbon Adsorption and chemisorption: Next, the V5-Cell™ Gas and Odour filter uses granular activated carbon adsorption and chemisorption to eliminate volatile organic compounds (the cause of odour) and other harmful chemicals.

o The V5-Cell in the IQAir HealthPro250 contains a blend of 2.5 kilos of broad-spectrum MultiGas gas and odour control media. The MultiGas media is composed of equal parts of uniquely formulated high-performance activated carbon and activated alumina impregnated with potassium permanganate.

o The activated carbon removes gaseous molecules by a physical process called adsorption which physically binds the molecules within its porous carbon structure. Activated carbon is especially suitable to remove compounds with a high molecular weight such as volatile organic compounds (VOCs), for example, benzene, toluene and xylene.

o For control of gaseous contaminants with low molecular weight, such as formaldehyde and hydrogen sulphide, the V5-Cell Gas and Odour Filter contains chemically activated alumina, also called chemisorber. This chemisorber media is made of activated alumina (Al2O3) impregnated with potassium permanganate (KMnO4). This non-toxic media first physically binds selected contaminant molecules and then chemically destroys them through an oxidation process.

• HyperHEPA Filtration: Lastly, the unequalled IQAir HealthPro250 HyperHEPA filter eliminates fine, ultrafine particles (ultra-fine particles which are less than 0.1 microns, which go into the bloodstream and cause severe damage to all organs of the human body), bacteria, viruses and combustion particles.

IQAir unique HyperHEPA technology is tested and certified to filter ultrafine pollution particles down to 0.003 microns in size with a guaranteed minimum efficiency of over 99.5%. This is 100 times smaller than what ordinary air cleaners can filter and 10 times smaller than a virus.

The medical-grade filter media in IQAir HealthPro250 HyperHEPA filter is glass microfiber, mini-pleat design with inert thermoplastic separators. The large surface area of 53 square feet of the HyperHEPA filter guarantees optimum filtration for up to 2.5 years under the prescribed operating conditions.

Tested and certified – IQAir HyperHEPA filter is the world’s first residential air filter to be tested and certified in accordance with European Norm EN 1822, the industry’s most stringent test standard for air filters. In addition, to ensure that every IQAir HealthPro250 air purifier is actually delivering superior air quality, each and every system is individually tested at the factory with an electronic particle counter and is certified to filter a minimum of 99.97% of all particles 0.3 microns or larger. This guarantees uncompromising performance even in the most demanding applications.

The quietest high-performance air purifier ever: IQAir HealthPro250 has an average of 7% less sound across all fan speeds, without sacrificing filter life or system efficiency. You can now have clean, healthy air without disrupting environment with noise. The fan motor is placed between sound-attenuating filters, the double-walled housing effectively reduces sound transmission. Rubber suspension pads systematically isolate motor vibration from the air cleaner housing. The EvenFlow Diffuser deflects sounds back into the system while returning low turbulence and low-velocity air to the room. The result is an air purifier quiet enough for your bedroom.

Easy filter replacement: IQAir HealthPro 250 features a revolutionary modular tower design, which snaps open to allow access to all filters in a matter of seconds. By simply releasing the locking arms and sliding the filters out of the frame, almost anyone can replace any of the filters in moments without special tools. No other air purifier even comes close to the simplicity of maintaining an IQAir air purifier.

Energy-efficient: IQAir HealthPro250 costs very little to operate. It only requires about as much power as a conventional light bulb. At the very heart of these air purifiers are the ultra-efficient fan and its maintenance-free motor. This amazing powerhouse requires as little as 20 watts of power at the lowest speed and up to a maximum of 135 watts at the highest speed. As a result, it costs very less to operate.

Powerful fan: IQAir HealthPro250 comes with the most powerful fan ever used in a compact room air purifier. This power translates into even better air cleaning results. The new three-dimensionally optimized design now uses state-of-the-art aerodynamics to convert energy into more air and less noise. IQAir use the highest quality fan motor available. This fan has an astonishing 1200 m³/h rating. Because each fan is individually balanced and uses steel ball bearings, it outlasts other fans by years. The IQAir New Edition fan is suspended in a separate module that isolates the fan from the housing with eight shock absorbers to further reduce noise.

Sophisticated controls: IQAir HealthPro250 has six fan speeds and its streamlined system control allows you to easily program automatic operation via a day/night timer. This helps in bringing down the energy consumption cost and extend filter life, also the intelligent filter-life monitor precisely forecasts filter replacement based on actual usage and colour-coded lights tells when it’s time to change each filter.

InFlow Ducting: The InFlow ducting kit can be easily connected to IQAir HealthPro250. It enables the system to draw in “fresh” but polluted air from outdoors or adjacent rooms. The IQAir system filters the airborne pollutants and pathogens and expels the fresh and clean air to the indoor environment.

The InFlow ducting adapter combined with IQAir stand-alone air cleaning system can be used in a variety of applications to: