“Today with mobility industry consolidating, only the most efficient providers and distributors will survive” 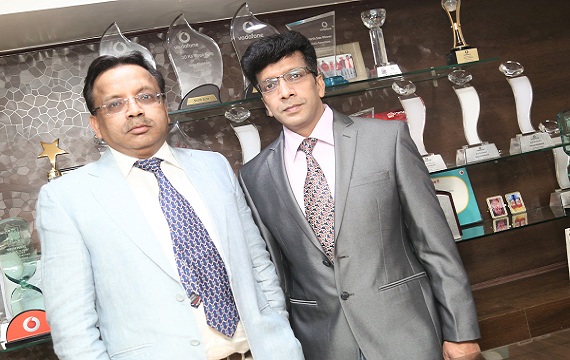 Sanjay Jain is one of the partners in the three sister organizations which are into distribution of mobile Etopup & Coupons recharging services and Mobile Handsets. Hello Shubam (with Sanjay Jain as Proprietor) with office at Azadpur deals only Vodafone; Hello Sarvottam is based in Mukherjee Nagar, Delhi, and deals with Reliance Jio; and Sarvottam Telecare Pvt Ltd in 2011 (Partners: Sanjay Jain (Director) & Jainendra Jain (Director)) deals in Micormax Handsets Distribution in North Zone. In an interaction with Mobility Magazine, Sanjay Jain shares their companies’ outlook, vision and strategy.

Hello Shubham is the oldest distribution concern since 1996 in Pan India, when telecom industry was in the budding phase. Initially we were associated with the Essar Mobile Company (in the year1996) which was later taken over by Hutch (in the year 2000) and finally by the Vodafone (in the year 2007).The companies kept on changing from time to time and also their Management including their modus operandi. The trends of the market, the consumer base, the principle requirements and almost everything, connected kept on changing at a steady pace. During all this we not only retained our position but also evolved to a higher status. Credits to our Management skills, our excellent systems n processes, financial abilities, network n marketing techniques, adoptive nature and the overall goodwill that earned us dividends of laurels n repute. We not only survived the seasons, but also got sharpened in skills and knowledge. As a result, success was an imminent achievement.

Regarding their company’s USPs, Sanjay Jain adds, “Taking into account all our three verticals, our present revenue inflow is: Vodafone 40%, Micromax 30% and Reliance 30%. Reliance we started just 3 months back, but the revenues picked up fast and are increasing. About our USPs, we offer good support to our dealers and good service support to our end users and clear their queries and issues very fast. We maintain different sales and support teams for different brands and this helps us track our performance better. Next, all our employees work on daily targets basis, whereas other work on weekly or monthly targets. This gives us edge over our competitors.”

Today ecommerce is a growing trend, which cannot be avoided, because of the ease it offers the customers and ability to enable vendors to cut down costs of the distribution chain, but the traditional channel is often the first victim of this digital phenomenon that is invading the markets.

Regarding the latest trends in the mobility distribution and market dynamics, Sanjay Jain shares, “Due to the growth ecommerce, our offline channel sales as well as margins are coming down. Customers find it easier and economical to buy things through online channel. After demonetization, the online trend increased further bringing the offline further down. Anyway, we support the government’s initiatives as they will benefit the economy and the nation in the long run. Distribution business is consolidating with vendors and telecom service providers choosing only the best distributors and dropping the less efficient distributors. Also providers are adding more areas under the each distributor instead of increasing the number of distributors. On the handset front, Chinese brands are simply knocking out Indian brands because of the advantage they have to manufacture high quality products and lesser prices and also their ability to spend large amounts on promotion. Make in India still has many bottlenecks and it will take a much longer time before it takes off to a beneficial level. Right now lack of availability of skilled workforce in sufficient numbers and components are posing a big limitation to the Make in India and Indian manufacturers are nowhere close to competing with Chinese manufacturers. It will take several years before Indian manufacturers could reach the levels of efficiency of Chinese. Presently Make in India is limited to Assemble in India. Those who are assembling in India are just taking advantage of the incentives and discounts the government is offering. This is indirectly a revenue loss to the government.”

Regarding future plans, Sanjay Jain comments, “We are already in process to take ARD distribution and SME’s business too for Relience Jio . Reliance is soon coming up with new convergence schemes which include Internet, TV setup box and landline phone and it is expected to run well. In the coming years, we want to expand our distribution business in NCR also. For mobile handset distribution, we are planning to take Super Distributorship for Delhi and North India from a big brand with whom our negotiations are going on.” It is pertinent to mention here that we have a natural ability for optimum utilization of available resources with positive outlook.
We are being looked upon in the telecom industry (or otherwise also) for our ethical conduct and moral values.

“The Rewards n Recognition, appraisal notes etc. speaks volume of our hard work. We are proud of our proven track record”.

Brandworks to launch smartwatches; foresees manufacturing to catapult by 70–75% in 2022