Total Mobile Subscribers Base as on September 2017 is 946.66 million: COAI 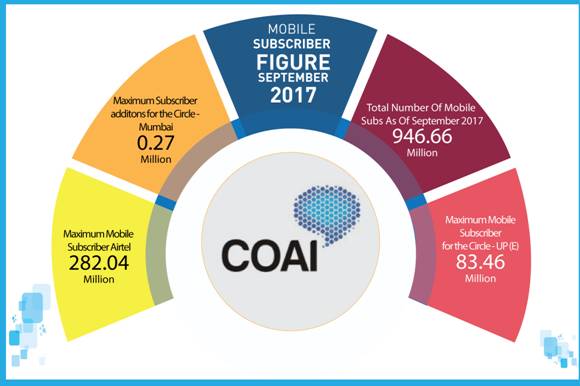 Amongst the individual companies, Bharti Airtel Ltd continues to hold the top position, with 29.80% market share, adding another 1.00 million subscribers during September to take its total subscriber base to 282.04 million subscribers. Airtel is closely followed by Vodafone India Ltd, which stands at 207.44 million, while Idea Cellular Ltd stood at 190.15 million subscribers at the end of September.

Mr. Rajan Mathews, Director General, COAI stated: “The increase of subscribers in Kerala, Haryana and Gujarat shows that there is still room for basic services to grow and expand to the corners of the country. The steady investment in infrastructure in these regions is showing positive result. The industry is reeling under a cumulative debt of over INR 4.6 lakh crores. The industry further needs an additional investment of over INR 2.5 lakh crore for infrastructure rollout and expansion, especially in the far flung areas of the country.”

Mobile connectivity and data services have played a pivotal role in bridging the digital divide and moving India towards a truly equitable and democratic nation. The telecom industry, therefore, deserves an urgent and immediate intervention to encourage policy and regulatory stability, and facilitate growth, innovation and investment in the sector.

The industry remains committed towards working for a fully connected and digitally empowered India and furthering the Hon Prime Minister’s vision of Digital India.