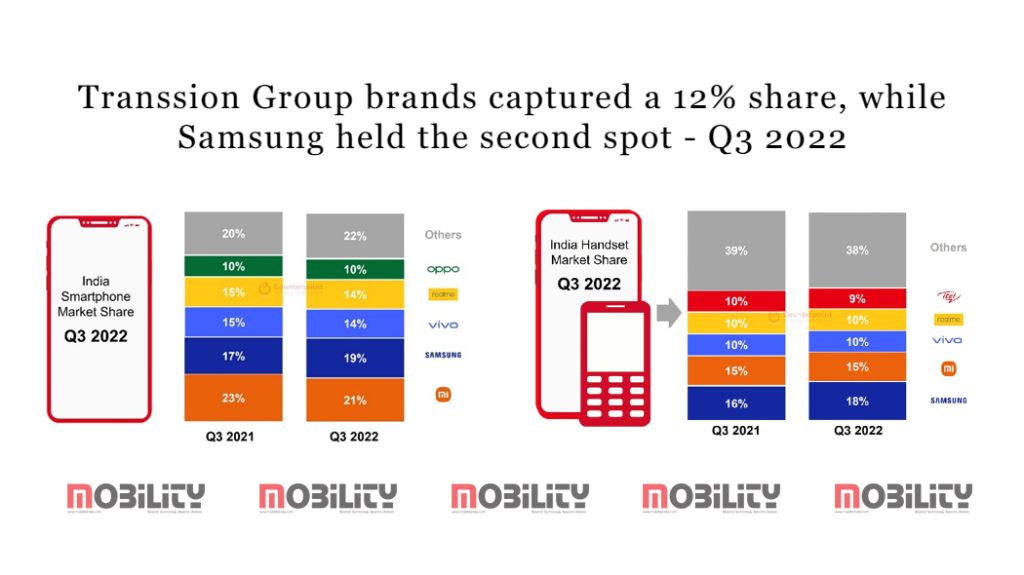 India’s smartphone shipments declined 11% YoY to reach over 45 million units in Q3 2022 (July-September. The YoY decline, which is the first ever for a Q3, can be attributed to the high base last year due to the pent-up demand during Q3 2021, as well as lower consumer demand in the entry-tier and budget segments in Q3 2022.

Commenting on the market dynamics, Senior Research Analyst Prachir Singh said, “Consumer demand started increasing in August and peaked in the last week of September during the festive sales, especially in the mid-tier and premium segments. However, as the market exited Q2 2022 with high inventory, and there was modest demand in the entry-tier and budget segments, we saw less than expected shipments during Q3 2022. Almost all the brands were impacted, especially in the entry-tier and budget segments. The unfavourable macroeconomic conditions will continue to affect the Indian smartphone market in Q4 2022 as well, especially after Diwali. However, we may witness a demand uptick during the year-end sales.”

Commenting on the competitive landscape and brand strategies, Research Analyst Shilpi Jain said, “After the 5G network rollout, consumers are quite keen on purchasing 5G smartphones, especially the upgrading users. In Q3 2022, 5G smartphones registered 31% YoY growth and contributed to 32% of the total shipments. In terms of price bands, the premium segment (>INR 30,000) reached its highest ever share of 12% during this quarter. Apple led the premium segment, followed by Samsung and OnePlus. The brand reached its highest ever shipment share in India and the iPhone 13 became the top smartphone model in Q3 2022, a first for Apple in India. The sub-INR 10,000 price band continues to be under pressure due to lower consumer demand and contributed to 27% of the total shipments, down from 31% a year ago.”