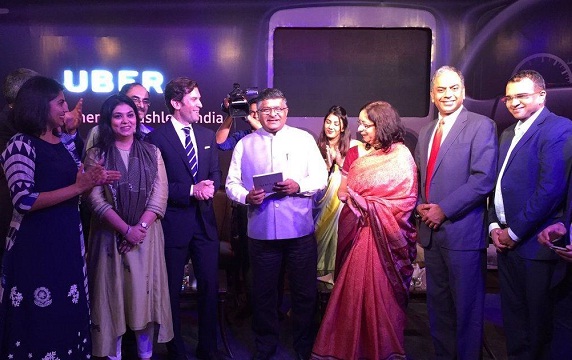 Forging an alliance that brings millions of riders and driver partners into the digital payments revolution, Uber India today announced a comprehensive Unified Payments Interface (UPI) integration in partnership with National Payments Corporation of India (NPCI) and banking partners Axis Bank and HDFC Bank. Supporting the government’s mission to transform India into a digital payments led society, Uber’s initiative reaffirms the ridesharing technology firm’s resolve to play a catalytic role in the mass adoption of fintech innovations such as BHIM/UPI for millions of riders and driver partners.

Launching the integration, the Hon’ble Union Minister of Electronics and Information Technology and Law & Justice, Government of India, Shri Ravi Shankar Prasad, said “India’s digital economy will become a $1trillion economy in the next five years. India’s digital payments economy alone will be bigger than $500 billion. Integration of Uber app with UPI-BHIM will boost the digital economy of India.”

Underscoring the significance of India as a priority market for Uber that clocked double-digit growth and completed 500 million trips within less than four years of operations, Mr. David Richter, SVP-Global Business, Uber reaffirmed to the audience that India, one of the largest markets for the ride-sharing technology firm, will remain a priority for the company globally and will continue to witness the rollout of a robust pipeline of new products and features for both riders and driver partners. The launch witnessed the participation of over 100 delegates including Ms Shikha Sharma, Managing Director & CEO, Axis Bank, Mr. Parag Rao, Country Head –  Card Payment Products, Merchant Acquiring Services & Marketing, HDFC Bank, Ms. Shweta Rajpal Kohli, Head of Public Policy for Uber India & South Asia and Mr. Madhu Kannan, Chief Business Officer, Uber India & Emerging Markets.

After demonetisation, businesses in India have witnessed a significant uptick in adoption of digital payment methods over cash transactions and Uber believes that fintech innovations such as UPI are the future of payments in India. Echoing this sentiment Mr. David Richter,SVP-Global Business, Uber said, “We are proud to be a partner in the government’s monumental mission to create a digital payments led society and thrilled to announce UPI integration, a significant collaborative step towards unlocking the potential of fintech innovations in accelerating the growth of the nation’s digital economy. Uber, like several other tech companies in India and around the world, depends on consumers being able to frequently make low value payments with minimal friction. UPI integration will bring millions of riders and driver partners into the digital payments ecosystem, offering them another secure and seamless payment interface and bolster the nation’s digital payment revolution.”

As a technology driven company, Uber is encouraged by the recent moves of the government towards mainstreaming digital payments. Hailing the impact that new-age fintech solutions such as UPI can make, as a first step, Uber offered its riders the option to use their existing UPI IDs to pay for their rides in July 2017.

Emboldened by the immense possibilities, and in collaboration with policymakers, NPCI and banking partners, the second phase of Uber’s UPI integration is a truly comprehensive roll-out, that allows riders to even create UPI IDs using the Uber app and initiate their journey onto a digital payments led society. With over 9.4 million Uber trips a week in India this July, the potential for encouraging adoption of UPI across riders is immense.

Equally significant will be the impact on the driver side. Through the steadfast adoption of BHIM over the next few weeks among its 285,000+ weekly active drivers, the move will additionally enable over 450,000 registered drivers on the Uber platform to experience the power of UPI.

Noting the significance of public private partnership in taking the benefits of digital cashless transactions to the masses, Mr. Dilip Asbe, Chief Operating Officer, National Payments Corporation of India said, “Driven by increased acceptance among consumers, merchants and member-banks, the transactions on UPI have grown exponentially. UPI powered Bharat Interface for Money (BHIM) is also serving as a key enabler in this digitisation drive. Since nearly 60 per cent of app based taxi drivers continue to make cash transactions, Uber’s integration with BHIM/UPI will provide a positive stimulus to strengthen the adoption of digital payments.”

Emphasizing on the potential of this joint initiative wherein Uber and its banking partner for rider side integration, Axis Bank, worked closely with NCPI to create a seamless and smooth customer experience, Ms. Shikha Sharma, Managing Director & CEO, Axis Bank pointed out, “As a committed partner to the government’s Digital India movement, we believe our alliance with Uber with the support of NPCI has the potential for making digital payments more ubiquitous, particularly in the case of financial transactions of smaller amounts. UPI integration into Uber will not only simplify digital payments but also drive the adoption of UPI payment gateways among the huge section of consumers in the country.”

Mr. Parag Rao, Country Head –  Card Payment Products, Merchant Acquiring Services & Marketing, HDFC Bank said “We are excited to partner with Uber. HDFC Bank has been steadfastly working to bring consumers and merchants across the spectrum into the banking fold and help them become a part of the digital payments ecosystem. With this partnership, we’ll be able to increase the adoption of BHIM and HDFC Bank UPI app, which will result in lakhs of Uber drivers becoming a part of the digital banking ecosystem.”

Financial literacy and affordable access to digital payment technologies are fast emerging as principal ways to bring millions of unbanked citizens into the formal and regulated financial system in India. Development in mobile telephony, the government’s increased focus on financial empowerment of the unbanked, and a vibrant entrepreneurial ecosystem are together leading to the emergence of a digital finance ecosystem. Uber India is committed to creating opportunities that foster an ecosystem of skill development and entrepreneurship. Uber India’s collaborative initiative of a comprehensive UPI integration that breaks the cost barrier of digital transactions for the low-income consumers, reduces friction for low amount transactions and drastically boosts interoperability for millions in India, is another step towards its vision of UberSHAAN – an effort is to rapidly scale India’s entrepreneurial base and generate 1 million livelihood opportunities on the Uber platform by 2018.