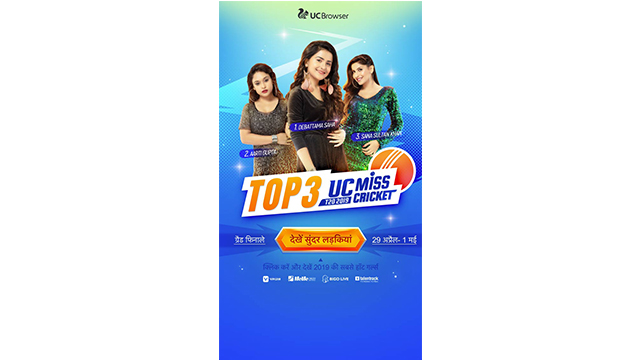 After weeks of intense competition, the UC Miss Cricket Contest has come to an end, with the winner, 23-year old Sana Sultan Khanof Mumbai, featuring on a billboard at New York Times Square this month. UC Miss Cricket is an exciting property offered by UC with an aim to be India’s 1st cricket-themed online pageant. The contest received an overwhelming response with over 2 million UC users and cricket fans taking part. Over 80 million pieces of content was consumed on UC Browser during the course of the contest. The second and third runner-up were aspiring actresses Aarti Gupta and Debattama Saha from the cities of Chandigarh and Kolkata respectively. The top 3 winners get a handsome cash prize from UC Browser.

The contest, launched as part of UC’s cricket coverage, added a fun element to the browser’s IPL updates. UC Browser’s in-app tool of cricket content aggregation offers all-in-one live cricket content, including live scores, news, videos, photos, live commentaries and more. While users followed updates of their favorite teams and players on UC Browser, they also picked cheerleaders to support these teams. GIFs were most popular form of content during the contest.

Divas and social media influencers from multiple channels including Telentrack, VMate, Bigo, MeMe Live, Campus, and social media took part in the contest. The top 8 contestants, chosen by popular vote, undertook multiple challenges and answered scores of questions. Angel Rai even released her song during the course of the contest. These 8 contestantsget a chance for a professional video shoot for online and offline promotional activity with UC with some of the top-notch advertisers in the country.

The Top 8 Winners are: