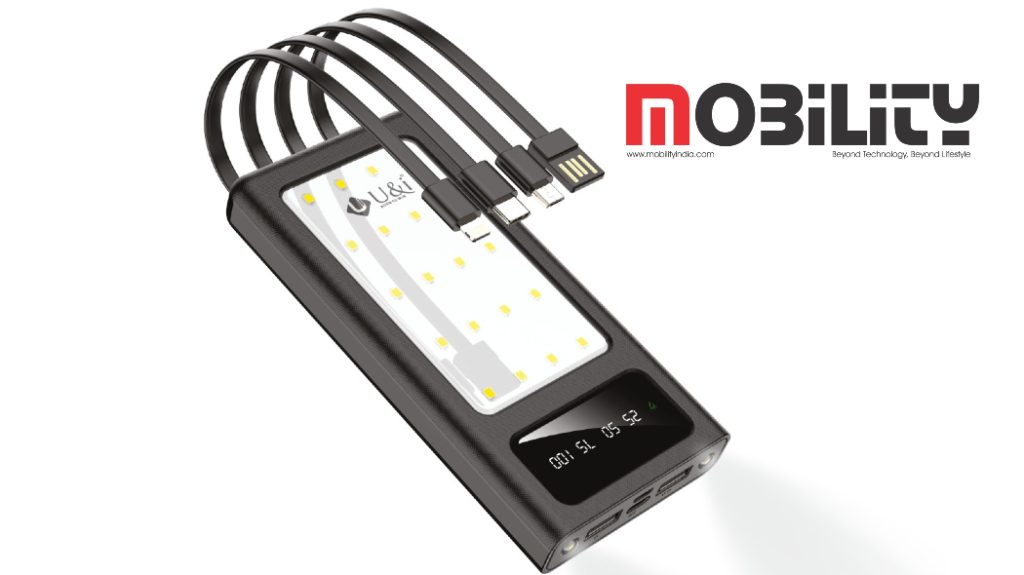 When you buy a smartphone, your most important accessory in line is a charging accessory. Whether it’s an Apple or Android device, you will always need a powerbank for your home, office, car, or travel. Having a powerbank with inbuilt cables with you is always a wise decision as you never know when it might come in handy. India’s most progressive Gadget Accessory and Consumer Electronics brand U&i has announced the launch of U&i Switcher Series 10000mAh 7-in-1 Powerbank with Flashlight for your smartphone needs.

Powerbank is one of the most crucial accessories that everyone should have, especially when you are frequently traveling out of home. The  U&i Switcher Series is a powerful 10000mAh powerbank that can fast-charge almost any device that needs it. A conventional smartphone can be recharged almost thrice, allowing you to be away from your wall adapter for up to 4 days in a row.  The powerbank features four power cables for all three types of ports — namely Micro USB, Type-C, and Lightning. In short, any Android or Apple smartphone, headphones, and BT speakers can be charged up to 3 times.

The powerbank also has an attached USB-A cable that allows itself to charge directly from any USB port from a laptop, desktop, or power adapter. Additionally, the powerbank also features a micro USB port for charging itself, a USB Type-C port for charging itself and power output, and two USB Type-A ports for charging two devices with the help of a USB Cable. In short, you could charge up to six devices simultaneously. A battery charge indicator is also available so you can see the amount of power remaining in the internal batteries.

Lastly, the USP of U&i UiPB 3483 is the built-in flashlight or COB light— 20 micro LEDs on the face of the powerbank that produces a very bright illumination in the room.

Additionally, two LEDs on the bottom also act as flashlights that can focus the light into a beam. One can use it as a temporary work light or an emergency light when the lights go out, possibly, a great accessory for those who love to camp out and be close to nature.