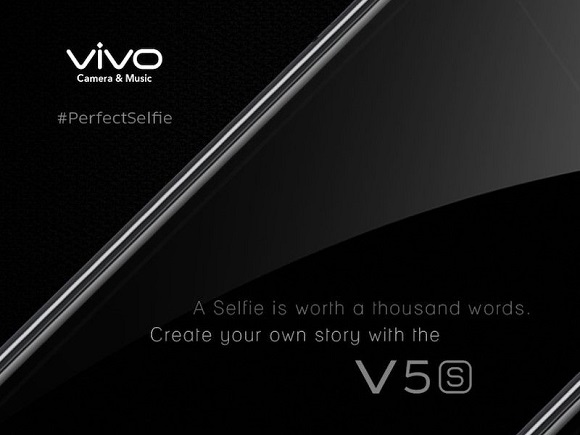 Chinese smartphone manufacturer Vivo has announced the Vivo V5s launch in India. The Vivo V5s smartphone is priced at Rs. 18,990/-.

The Vivo V5s smartphone sports a metallic unibody design with a 2.5D curved glass on the front panel. It comes with a 5.5-inch HD display screen with a resolution 1280 pixels by 720 pixels. Under the hood, the device is powered by an octa-core MediaTek MT6750 processor clocked at a speed of 1.5GHz and coupled with Mali T860 GPU. The device is packed with a huge 4GB of RAM onboard.

The Vivo V5s smartphone comes equipped with a built-in 64GB of internal memory storage, which can be further expandable up to 128GB via a dedicated microSD card slot. The device will run on the Android 6.0 (Marshmallow) operating system out of the box coupled with FunTouch OS 2.6 user interface.
On the photography department, the Vivo V5s sports a 20-megapixels Sony IMX376 front-facing sensor with f/2.0 aperture and LED flash support. On the rear is a 13-megapixels camera with PDAF and f/2.2 aperture. Fueling the device is a non-removable 3,000 mAh capacity battery.
Other features the Vivo V5s smartphone offers include a physical home button with fingerprint sensor, 4G LTE, Bluetooth, GPS, Wi-Fi, 3.5mm Audio port, and a MicroUSB 2.0 port. The device’s sensors include an Ambient light sensor, Accelerometer, Proximity, Magnetic, Gyroscope, and E-compass sensor. The device measures a body dimension of 153.8 mm x 75.5 mm x 7.55 mm and weighs 154 grams.