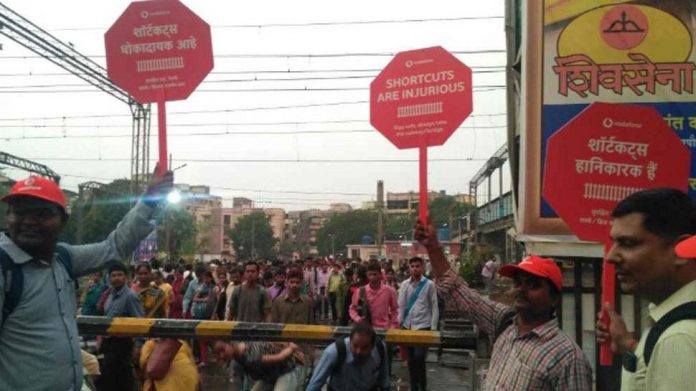 Over 75 lakh Mumbaikars travel on Mumbai’s local trains each day. In 2017, over 3000 lost their lives while crossing railway tracks in Mumbai. The employees of Mumbai’s most preferred telecom services network decided to do their bit to spread awareness on the hazards of taking shortcuts across railway tracks. Vodafone India has initiated a campaign urging Mumbaikars to refrain from crossing railway tracks in the interest of their own safety. Recently conducted across 14 suburban railway stations in Mumbai, the campaign connected with several thousand rail commuters, exhorting them to stay away from the railway tracks. Over 1500 Mumbaikars extended their support to Vodafone’s ‘Shortcuts are Injurious’ campaign by assuring that they will not walk across the railway tracks henceforth.

Speaking about the initiative, Pushpinder Singh Gujral, Business Head – Mumbai, Vodafone India, said, “Vodafone’s ‘Shortcuts are Injurious’ campaign is being carried out by its own employees as a part of Vodafone India’s larger commitment to propagate their Health, Safety and Well-Being policy not just for their employees and partners, but also for customers, visitors and society at large. Mumbai’s suburban rail network is a crucial lifeline ferrying millions of people to and from their homes and workplaces. Recent reports indicate that numerous lives are lost each day, while crossing the city’s railway tracks. We want every Mumbaikar to get back home safe and sound at the end of each day. Having touched the lives of over 1500 rail commuters through the first phase of this campaign, I am happy to say that we have made a beginning”.