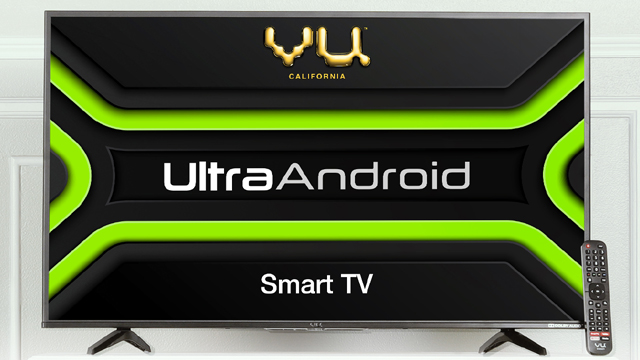 Vu Televisions launches their new range of televisions – the Vu UltraAndroid TV. The demand for Vu Televisions in the last few years has only increased and with a 30% YoY growth, this festive season, Vu Televisions is extremely bullish about their growth to double in comparison to last year.

Devita Saraf, Chairman, Vu Televisions said: “Over the years, Vu Televisions has revolutionized the video viewing experience for their consumers with a perfect mix of innovation and technology. Our consumers comprise primarily of the young, educated India whose preferences are constantly evolving. Vu Televisions caters to exactly that audience segment that is not only looking for great picture and sound quality, but new innovative experiences that are a part of their day to day lives.”

The VU UltraAndroid television comes with a set of power packed specifications. The Vu Ultra Android TV has a Pure Prism Grade High Brightness Panel, along with exemplary Adaptive Contrast to maintain the perfect colour accuracy for pragmatic clarity. The Vu UltraAndroid TV gives an approachable access to the world of Google with an additional 8GB Storage.

The ActiVoice search and personalized recommendations provide more entertainment and less hassle. The Vu UltraAndroid TV range is powered by the latest version of Google Android 9.0 and also has Hotkeys on the remote for Netflix, Amazon Prime Video, Hotstar, YouTube and Google Play which creates an effortless experience for users while watching content.

The TV set also comes with built-in Dolby and DTS Surround Sound Technologies for the best sound experience. VU Ultra Android TV has built-in Google Chrome cast feature through which one can simply casts movies, shows and photos from their Android, iOS, Mac or Windows device to your television set. It also has Built-in Bluetooth 5.0 version as well.