Wearable market to grow : the New Trend Setter in 2023 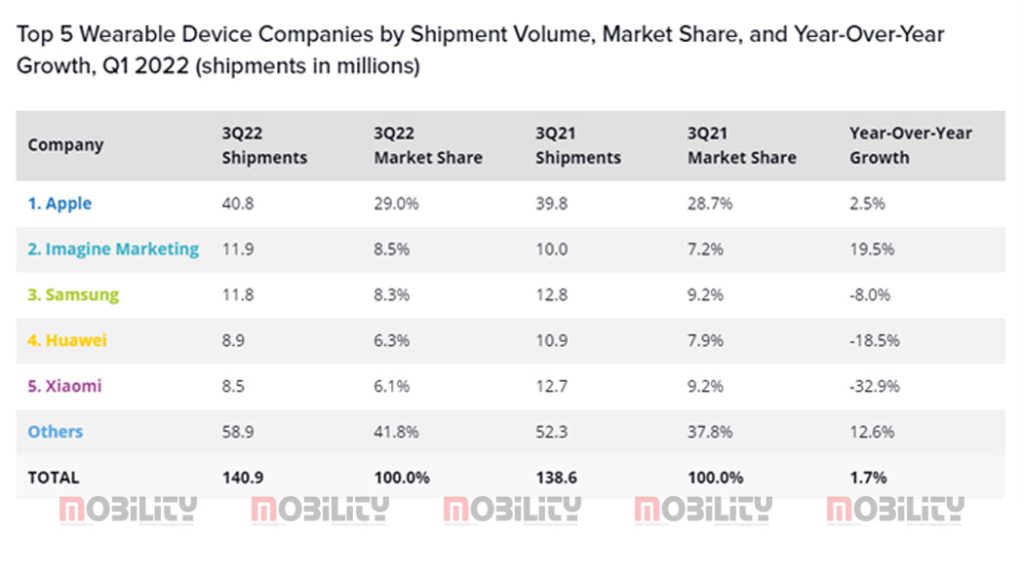 Wearables market is forecasted to grow at a healthy pace with a 5 year compound annual growth rate (CAGR) of 5.1% as unit shipments reach 628.3 million

India’s wearable market registered another record quarter, shipping 37.2 million units in 3Q22 (July-Sep), a growth of 56.4% YoY (year-over-year). The first nine months of the year (Jan-Sep) have seen 75-million-unit shipments. Vendors continued to remain aggressive in their shipments to build inventory for the festive season (August-October) supported by high-decibel marketing and promotional activities across channels. Heavy discounting and offers were also rolled out during online sales events resulting in a 13.6% YoY decline in average selling price (ASP) in 3Q22.

While the wearables market inched towards growth during the third quarter of 2022 (3Q22), allowing the market to grow 1.7% year-over-year, global shipments for the full year of 2022 are forecasted to decline 3.3%, ending the year with 515.6 million devices shipped and marking the first full year of decline since 2013. The extreme growth during the first two years of the pandemic as well as global macroeconomic challenges will prove to be a deterrent for growth during 2022. However, an easing of the economic slowdown as well as rising demand from emerging markets will help the wearables category return to growth in 2023 with 539M units shipped.

Though the market has traditionally been dominated by the tech incumbents such as Apple, Samsung, Huawei, and Xiaomi, that mix has been shifting as growth within India and specifically Indian brands, has outpaced the rest of the world. During 3Q22, 3 of the top 10 wearable device companies were Indian, with Imagine Marketing leaping into second place behind Apple as a global player.

“India is on track to surpass USA to become the second largest market for wearables in terms of units shipped though it will be a far cry from a top contender in terms of dollar value,” said Jitesh Ubrani, research manager for Mobility and Consumer Device Trackers. “This certainly bodes well for premium brands such as Apple, Google, and Samsung as they are generally priced a step above. However, it puts value-oriented brands such as Xiaomi and Huawei in a precaious position where they could face intense competion within their price bracket as the Indian brands continue to expand their presence.”

Looking ahead, the wearables market is forecasted to grow at a healthy pace with a 5 year compound annual growth rate (CAGR) of 5.1% as unit shipments reach 628.3 million by the end of 2026. IDC now expects smartwatches inclusive of those that run a high level operating system such as an Apple Watch or Wear OS watch as well as those running on a real-time operating system (RTOS) such as those from Polar, Withings, OnePlus, or others, to grow with a 6.3% CAGR while hearables experience a 5.1% CAGR over the same period.

“Although the market will contract in 2022, this is only temporary,” said Ramon T. Llamas, research director with IDC’s Wearables team “The market fundamentals are sound with healthy replacement rates, continued market penetration, and greater availability of more devices at different feature sets and price points in the years to come. But given the number of brands and devices, differentiation will become hard to come by. This puts the onus on vendors to develop best-in-market devices and solutions to attract and retain customers.