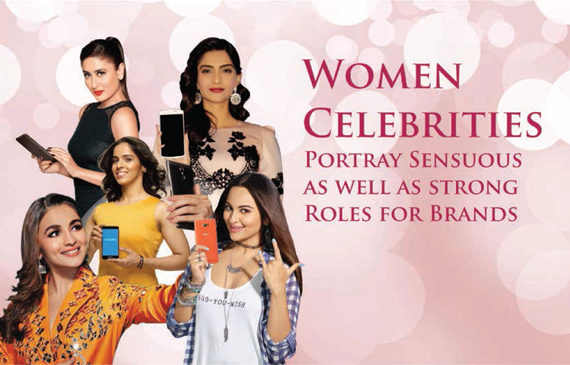 By: MOBILITY INDIA
In: Top Stories
Share Your Social Media

The adoption of women celebrities by Indian advertising agencies has experienced a tremendous increase in the last 15 years. Women Celebrity advertisement is considered as an effective communication strategy between the marketer and consumers. A good number of companies have adopted this strategy as an effective tool to penetrate the product in to the different segment of the market.

Endorsing brands of the products through a well known personality has become very prominent these days as they sort out the problem of over communication, provides instant recognition and transfers their goodwill to the brand. Earlier this exercise was exclusively performed within the domain of models but with the advent of celebrities in Hindi movies and Sports arena since the late nineteenth century they ventured out into their bastion.

Today the celebrities are popular and well followed by consumers. Thus, marketers tend to instantly enlist bankable celebrities to pitch their particular products. A celebrity with a positive and credible image can help capture consumers’ attention to a brand so that his ideal attributes could be linked and related to the product.

Not all celebrities could be ideal brand ambassadors. There should be obvious power to sell a brand. Marketers should carefully study consumers’ perceptions before celebrities are hired to link with a brand. A celebrity should also be identified with a brand for quite some time before consumers easily associate the two.

In order to pamper the consumer a celebrity is deployed to transmit credibility and inspirational values to a brand in alignment with the product. There should be certain compatibility between the brand ambassador and the brand personality like celebrity, popularity, availability, physical attractiveness and their profession in consonance with the product. It is indispensable that creativity should underlie while using celebrity endorsement otherwise it may over power and overshadow the brand popularly known as vampire effect.

Here are the most successful celebrity brands of this generation. Take note that most of these icons could easily be associated with the brands and products they endorse or sell.
These commercials appear during the breaks taken during the program so automatically people watch them while waiting for their programs to continue. The brands pay high amounts to the channels for showing their advertisements on the televisions.

Advertisement is one of the major weapons used by various national as well as international brands to gain popularity for their products. Especially the television commercials are more attention-seeking as most of the population spends at least some of their time watching television.

Women have many roles to play in her lifetime, some of them, and also the most important ones, being a mother, a wife, a daughter etc. Women, in the old times, were used in advertisements to portray delicacy and tenderness. Even in the movies, they were portrayed to be delicate and very soft by heart so they were basically included in the advertisement of brands of washing powders, talcum powders etc.

For example, Nirma, a famous Indian brand of washing powder, has been including only women in their advertisements since its advent, as in India an ideal women is considered to do all household work, including washing clothes.

With time, home-makers i.e. women started being included in the advertisement of the brands of household appliances, utensils, feminine talcum powders etc. Hawkins, the brand of Indian pressure cooker has been portraying women as a mother as well as a wife in its commercials. As the food cooked by a mother is considered to be the tastiest food in Indian society (arguably for the love and care put in), and when the mother is unable to do so, the wife gets into the role.

Today, women are not just a symbol of delicacy and tenderness; they portray sensuous as well as strong roles on the television. Women are also used to increase glamour in the advertisements.

Brands like Axe and Addiction (Deodorants) include women in their commercials to make their commercials sensational and tempting. Women get attracted to the masculine fragrances in these ads, so these ads appear quite appealing to the youth.
Next, women are also seen in the ads of scooties and cars, sometimes to increase the glamour and sometimes to portray girl-power. Pleasure, an Indian scooty brand has its tagline as ‘Why should boys have all the fun!’ Here women are used to show that they are no less than men. Upon the dawn of enlightenment, women have come to play strong roles in advertisements and not just objects of desire. But sadly, the latter part of it refuses to whither.

Women can also be seen in the ads of condoms, attracting men towards themselves. In telling about the significance of using protection, the advertisers serve a dual purpose — glamour and deliverance of a crucial message!

Women can be seen in almost all type of ads today, be it feminine, be it strong, be it delicate: they fit into all kind of roles and possess the potential to portray in perfectly! All in all, it’s safe to say that the world of advertisement is incomplete without women!

Celebrity endorsement if used effectively will make the brand standout from the crowd, galvanize brand recall by escalating Unique Selling Proposition and facilitate instant awareness. Hence, before choosing a celebrity as the brand ambassador the company should think that their reputation may derogate the product and the novelty of the product gets diluted if he /she is engaged in too many advertisements.

For example, Oppo is a Chinese brand that has launched its mobile phones in India. Intelligence, to reach the masses and create an impression on the users’ minds the brand chose the top celebrities like Hrithik & Sonam Kapoor for its TVC. Not only has this, but following good marketing strategy now the brand associated with one of the biggest e-commerce company Flipkart.com

Kareena is associated with iBall Andi for quite a long now. The brand is doing quite a nice job these days and association of the big celebs like Kareena for mobiles and Hrithik for tabs have helped it in attracting the buyers a lot.

Honor, the e-brand from Huawei, has signed up Saina Nehwal as its India brand ambassador. The smartphone manufacturer has signed a long-term pact with the Olympic medalist to endorse its Honor range of smartphones. The partnership with Nehwal coincides with Honor’s next phase of growth in India, as the e-brand aims to significantly strengthen its market share in India.

Chaze is another new entrant in the Indian mobile market. While it promises to bring various new models with smart phone features to the market, they choose Sunny Leone to endorse the brand. Pretty intriguing choice!

Finally
Celebrity endorsement if used effectively will make the brand standout from the crowd, galvanize brand recall by escalating Unique Selling Proposition and facilitate instant awareness. Celebrity endorsements pull in hundreds of Corers every year, and are widely preferred by marketers to promote their products. It is considered as one of the powerful tools adopted by the mobile companies to consolidate their brand in the crowded market place. Different types of celebrities are used as endorsers in marketing campaigns. Most of the celebrities are from the film and sports arena as their popularity extends to relatively wider segment of the population.