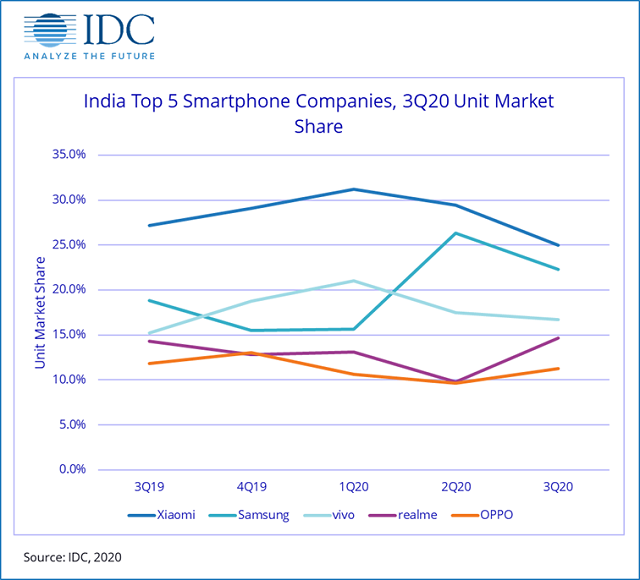 India was the only smartphone market in the top three to witness growth, as both the China and USA markets declined year-over-year (YoY) in Q3, 2020, says a new report.According to the International Data Corporation’s (IDC) Quarterly Mobile Phone Tracker, a record 54.3 million units were shipped during the quarter with 17 per cent YoY growth in the crucial third quarter of the year.The reopening of the country with fewer restrictions was further fueled by pent-up demand in July and August and channel stocking in September to meet the upcoming Diwali quarter demand.

The key market trends for 3Q20 are listed as below:

Channel Highlights: eTailers led the online channel share reaching an all-time high of 48%, growing by a healthy 24% YoY. Cautious consumers preferred online purchases as they were driven by promotions and sale events on eTailer platforms.
Offline channels registered a moderate 11% YoY growth after a challenging first half of the year. New launches had severe supply constraints in offline channels.

IDC expects growth to continue for the online channel, driven by more affordability initiatives and pricing aggression in comparison to offline channels during the festive months, even as supply starts to normalize for the offline channels.

Though the 5G network will only launch by end-2021, the “devices go first” strategy led to a million units of 5G smartphone shipments in 3Q20. IDC expects a gradual uptake of 5G devices in 2021, expanding into the mid-range segment, as the ASP gap between 4G and 5G offerings narrows.

Price Trends ASPs (average selling price) declined by 2% YoY at US$156, with 84% of shipments in the sub-US$200 range (29% below US$100), driven by e-learning requirements since smartphones remain the only device for internet access for most households in India.

The mid-range segment (US$200<500) declined YoY, as consumers held back on upgrading to a more expensive smartphone due to economic uncertainties.

The premium segment (US$500+) witnessed a strong growth of 91% YoY; where Apple, Samsung, and OnePlus continued to be the top three players. Apple also launched its online store in 3Q20, offering a wide range of first-time services.

“IDC expects the low-end and mid-range segment to continue being the volume driver. As consumer sentiment improves in the next few quarters, upgrades and affordable 5G offerings in the US$200-500 segment is expected to drive growth,” says Upasana Joshi, Associate Research Manager, Client Devices, IDC India.

A total of 25 million feature phones were shipped in 3Q20, a decline of 30% YoY. As a result, the overall mobile phone market shipment dropped by 4% YoY, with feature phones accounting for only 31% share.

Xiaomi continued to lead for 3+ years, shipping 13.5 million units in 3Q20, a growth of 7% YoY. Xiaomi’s Redmi 8A Dual, Redmi 8, and Redmi Note 9 were the top three models nationally despite Xiaomi facing supply constraints in the early weeks of the quarter. Xiaomi also maintained the lead in the online channel with a 35% share, with POCO (sub-brand under Xiaomi) reaching an all-time high of more than one (1) million shipments in 3Q20.

Samsung at the second slot registered strong YoY growth of 38% in 3Q20 with record shipments of 12.1 million units. India became Samsung’s largest smartphone market globally, ahead of the US in 3Q20, accounting for 15% of its global shipments. It maintained steady supplies through the quarter in comparison to China-based vendors, clubbed with more offerings in low-end and mid-range price segments. Samsung also benefited from the anti-Chinese sentiments prevailing in the initial weeks of the quarter, which soon vaporized in the latter half. The online channel accounted for 43% of Samsung shipments, witnessing unprecedented growth in 3Q20 with the Galaxy M21 and M31 featuring in the top 5 online models nationally.

vivo stood at the third position, with shipments of 9.0 million units, growing by 27% YoY in 3Q20. It regained its top slot in the offline channel, ahead of Samsung, with a share of 29%. With fewer offerings in the online channel, vivo remained offline heavy with more offerings to come in the Diwali quarter.

realme at the fourth position grew 19% YoY to 8.0 million units in 3Q20. It also regained its second slot in the online channel ahead of Samsung with a 23% share. The C11 featured in the top 5 online models nationally.

OPPO in the fifth position with 6.1 million shipments grew by 11% YoY in 3Q20. Its supply constraints improved in 3Q20, with the A12, A53, and A11K as its top shipped models. It regained its third position in the offline channel with an 18% share, following vivo and Samsung, with managed supplies in the retail counters.