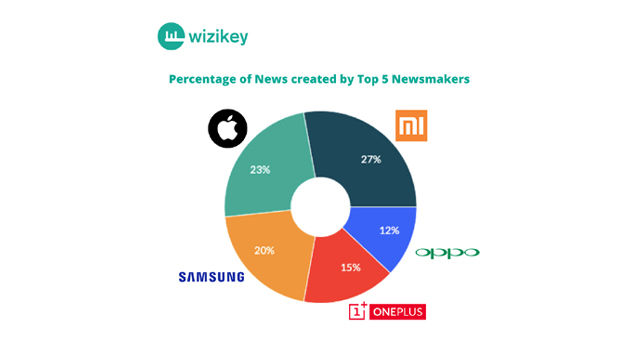 2019 was a year when phones came out with full-screen bezel-less display, pop-up selfie cameras and we saw the concept of foldable phones come into the market finally. Wizikey, Asia’s first PR and communication platform has collated interesting trends across the smartphone industry using its AI and ML-based Technology and created a report on the top newsmakers of 2019 in this category. With all competitors trying to consolidate their market share in the country with more and more advertising and media attention, the race to the top was extremely close.

Anshul Sushil, Founder and CEO of Wizikey said “The most common theme for all big players was either about their new product launches or the changes that they made in their platforms, be it technical or otherwise. Overall, the companies look to take the innovation route to continue market dominance. It is interesting to see how the giants innovate their technologies and PR strategies.”

Xiaomi has now turned most recognizable smartphone brand in India and surprisingly it created the most amount of news in the category. The Chinese giants continued making strides in the Indian market by continuously adding more devices to their portfolio. Nearly all their news made in the media was in relation to a new launch or sales. The highest selling series, i.e. Redmi, emerged as their MVP yet again as they remained the highest selling smartphone brand in India. The brand launched more than 20 smartphone models this year to cater to every segment of their target group, and their aggressive pricing and frequent discounts also played a huge role in their financial success. Xiaomi’s buzzwords were Manu Kumar Jain, Fitness Band and Supersale.

2019 was a year of consolidation for Apple, as they revisited many of their policies and security certificates. As expected their Annual product launch event in September, where they launched their new line of iPhones (iPhone 11, iPhone 11 pro and iPhone 11 Pro Max), made the most amount of headlines for them. The issues with regards to its privacy policy and its strong hand treatment of Facebook for their breach in security made sure that their positioning as the manufacturers of most secure smartphone remained intact. Apple made news on buzzwords like NextGen iPhone, Tim Cook and iOS.

The Korean tech giant Samsung had many note-worthy smartphone launches in 2019. Ranging from entry-level budget phones in the A series to the S10 and Note10 launches pitched against Apple’s latest offerings, smartphones kept Samsung in the news throughout the year. The launch of their latest S series phones amassed the most coverage for the brand in the year, closely followed by the Note 10 launch. Samsung’s buzzwords were Galaxy Smartphones, Smart Tabs and Budget Smartphones

The Chinese giant-killers OnePlus had an awesome year in the limelight. Kicking off 2019 with being crowned as the best selling premium smartphone of 2018, the company kept scaling heights throughout the year. The numerous design leaks of OnePlus 7 did not affect the phone’s sales, which were made evident with OnePlus’ record-breaking sales during the festive season. OnePlus was ahead of the competition in terms of the variety of news generated thanks to their tie-up with Sacred Games and the OnePlus Music Festival.OnePlus attached its news to buzzwords like Premium Smartphones and Sacred Games.

Oppo is yet another Chinese smartphone manufacturer that made quite a lot of news in this calendar year. Although the brand lost out to Byju’s for sponsoring the Indian cricket team, they did well overall thanks to their phone launches and their superior selfie cameras. The festive season, like for many manufacturers, was a gold mine for Oppo and so was their tie-up with PUBG in terms of the visibility they were able to generate.Oppo’s buzzwords were Beauty Camera, Pop-up Selfie Camera and Optical Zoom Smartphones.