In Q2 2021, global smartphone shipments increased 12%, as vaccines rolled out around the world, and the new normal for economies and citizens started to take shape. Samsung was the leading vendor with a 19% share of smartphones shipped. Xiaomi took second place for the first time ever, with a 17% share. Apple was third, with 14%, while Vivo and Oppo maintained strong growth momentum to complete the top five.

Key findings of the report 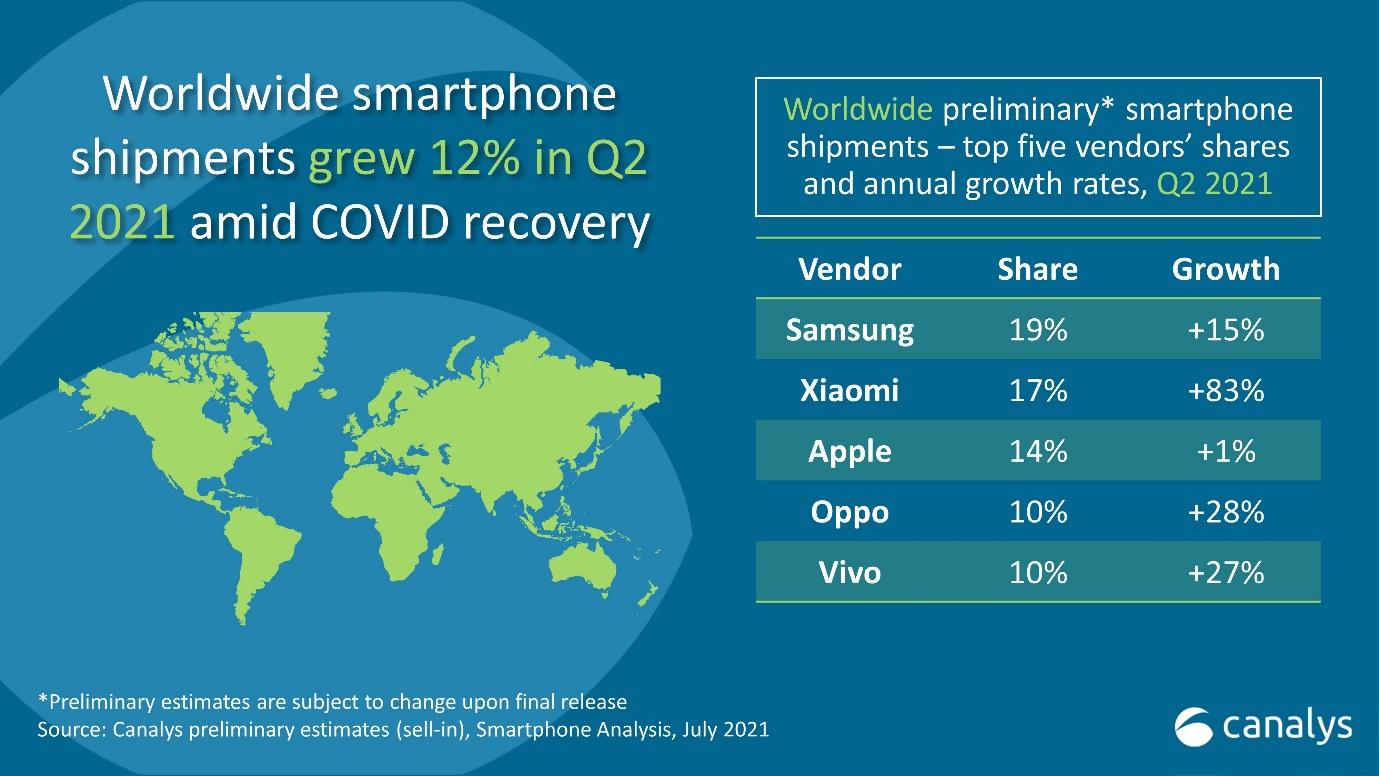 According to the report , the global smartphone shipments grew 12 percent in the second quarter, led by Samsung Electronics with a 19 percent share, and Apple at third place with a 14 percent share.

The average selling price of Xiaomi phones is about 40 percent to 75 percent cheaper compared with Samsung and Apple, respectively, Canalys Research Manager Ben Stanton said, adding that a major priority for Xiaomi this year is to grow sales of its high-end devices.

According to Canalys Research Manager Ben Stanton, Xiaomi is growing its overseas business rapidly as its shipments increased more than 300% in Latin America, 150% Africa and 50% in Western Europe.

The change is due to the growth and evolvement . He goes on to say that the brand is now transforming its business model from challenger to incumbent, with initiatives such as channel partner consolidation and more careful management of older stock in the open market. It is still largely skewed toward the mass market, however, and compared with Samsung and Apple, its average selling price is around 40% and 75% cheaper respectively. So a major priority for Xiaomi this year is to grow sales of its high-end devices, such as the Mi 11 Ultra.

Stanton foresees that it will be a tough battle, with Oppo and Vivo sharing the same objective, and both willing to spend big on above-the-line marketing to build their brands in a way that Xiaomi is not. All vendors are fighting hard to secure component supply amid global shortages, but Xiaomi already has its sights set on the next prize: displacing Samsung to become the world’s largest vendor.

Thus we see that Samsung is on top had a steady growth of 15 percent in year-on-year shipments, while Xiaomi’s global shipments grew by a staggering 83 percent and Apple at number 3 grew marginally by 1 percent, the report shows. Oppo and Vivo shipments increased by 28 percent and 27 percent, respectively.